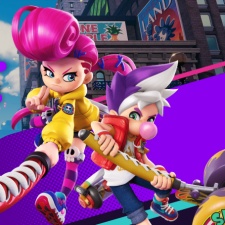 Japanese developer GungHo Online Entertainment has its sights set on the global stage with Ninjala.

Executives at the studio are looking for ways to diversify from mobile, regional hits. With the company’s flagship title Puzzles and Dragons in a long-term decline, though still generating a steady stream of revenue, GungHo is looking to break out from what it sees as the “black ocean” of Japanese mobile gaming.

Ninjala is its attempt to break into the less competitive console space through the Nintendo Switch.

While ostensibly a competitive online game, there’s a solid Splatoon influence with the game centring on less explicitly-violent cartoon action.

“Making a new intellectual property, we believe we can succeed on console,” said GungHo CEO Kazuki Morishita, as reported by Venturebeat.

“We wanted to make an action game where you pretend you’re a kid and imitating a ninja. That’s where the inspiration comes from, but we didn’t want to make it too violent.”

By going after genre and platforms more popular outside of Japan the studio hopes to find success worldwide.

“The Japanese market is really special, where the big emphasis is on mobile,” said Morishita.

“In the West, there are different play styles that are popular. That’s why we want to expand and achieve worldwide growth.”