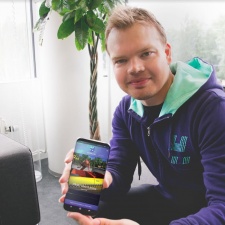 Cloud games streaming platform Hatch has teamed up with Samsung to bring its games service to South Korea by utilising the company’s 5G network.

As part of the agreement, three months of Hatch Premium will be included with any purchase of Samsung’s Galaxy S10 5G in the country.

Promotion for hatch will appear in retail stores across South Korea in addition to Hatch been featured as a ‘5G hero service’ in the Galaxy App Store and Game Launcher app.

Galaxy S10 5G users will be the first to try arcade classic Arkanoid Rising, which is being reimagined as part of Hatch Originals. More mobile exclusives are set to roll out for the service in future.

A number of Hatch League mobile esport tournaments have also been revealed to take place in South Korea later in the year.

Hatch recently partnered with Japan’s largest mobile operator DOCOMO to bring the platform to TV and mobiles across the country.

Cloud gaming will be a key topic of conversation at Pocket Gamer Connects Seattle 2019 on May 13th to 14th.