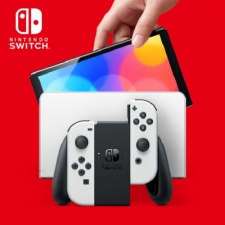 Nintendo has finally confirmed the existence of a new Switch device with the unveiling of the Nintendo Switch (OLED model).

After months of speculation - including a heavily rumoured announcement at the end of May - the Nintendo Switch (OLED model) was revealed in full via a new trailer from the Japanese company. Just like the standard Switch model, it will allow TV play, as well as being able to take the system on the go.

The biggest improvements arrive in the form of a larger seven-inch OLED screen that is described as having "vivid colours" and "crisp contrast". It will also feature a wide adjustable stand for tabletop mode, a new dock with a wired LAN port, enhanced audio and 64GB of internal storage.

At launch, the Nintendo Switch (OLED model) will be available in two colour options: white and red/neon blue.

"The new Nintendo Switch (OLED model) is a great option for players who want to experience the new vibrant screen when playing in handheld and tabletop mode," said Nintendo of America president Doug Bowser via a press release.

The debut trailer can be watched below:

The new console will release simultaneously with Metroid Dread after the new 2D title was shown off during Nintendo's E3 2021 showcase, alongside WarioWare: Get it Together and Breath of the Wild 2.

More recently, Nintendo confirmed that it is now seeking a permanent injunction against the owner of a website selling pirated games after the failure to pay the first instalment of the debt.