We speak to Dodreams, who took away the third place prize at The Big Indie Pitch at ChinaJoy 2017 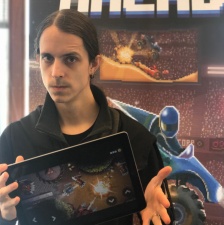 Today, we're speaking to Dodreams' Risto Holmstrom, who submited Drive Ahead! Arena to the Big Indie Pitch at ChinaJoy 2017 and took away the third place prize.

Risto Holmstrom: We are Dodreams, the makers of the Drive Ahead! mobile games. Founded back in 2008, we're now a team of over 20 awesome people. Our mission is to make games that keep surprising our fans, always fun first. We're working on four projects at the moment.

I joined the company as our Principal Designer in the summer of '16 and have since pitched in on all our games, both live and upcoming. Now my main focus is on Drive Ahead! Arena, the next smash hit in casual competitive games.

The core Arena team has 3 programmers, an artist and me. It's been a really special project for all of us: we're all getting to do the things we're most interested in, whether it be creating new physics engines or novelty game system theories.

When the game's ready, I hope the players too will feel what a labour of love it's been.

Drive Ahead! Arena is an "arena brawler". Put 50 players in an arena, have them duke it out with a crazy selection of cars in a real-time battle that's physics-based, add in a thorough metagame and wrap the whole package in neat pixel art - and there you have it.

It stands apart from the other ".io" games with its fast pacing, progression and physics. The game's definitely been one of the most ambitious projects I've been a part of and filled with completely alien challenges, but it's one of those games that can potentially change our expectations of what PvP mobile action can be.

Every indie developer I know has been through a rough patch at some point. While we're no different in this regard, now we've got an incredible community around the Drive Ahead! brand that truly makes a difference. The wonderful fans are the shoulders we can stand on.

What a great event. So much talent and ambition you could almost taste it in the air. It was great meeting so many like-minded developers and to have a chance to gauge the impressions everyone had on Drive Ahead! Arena.

he format of the pitch was intimate and pleasant. I found the idea of pitching to a smaller set of judges at a time a nice change of pace. It gave the whole thing a more personal twist, made it interactive.

The best take away was learning how people react to the game. Once you've worked on a game for a longer time behind closed doors, it's easy to forget what makes it special.

Seeing how the judges and indies got so excited about the idea was a great reminder that, yeah, we're onto something big here. As the game moves forward I'm hoping to get more feedback from the many great people I had the pleasure of meeting there.

I'm hoping that Drive Ahead! Arena redefines the casual PvP market and becomes a fan favourite for years to come. Go Big or go home!

We've set the bar high for the game, attempting a lot of stuff that many would think insane. We believe it's exactly that kind of crazy ambition that's at the root of every super success. And by no means is this the last Drive Ahead! game you'll see.