We speak to Raysol Games, the runner-up at The Big Indie Pitch at ChinaJoy 2017 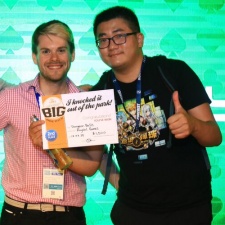 Today, we're speaking to Peter from Raysol Games, who submited Dungeon Balls to the Big Indie Pitch at ChinaJoy 2017 and came second.

Peter: I’m Peter from Taiwan. I used to be a programmer in a gaming company, but I switched lanes and became a designer later on because of my passion for designing games.

After working in a gaming company for seven years, I decided to start my own business and design the game of my dreams. I founded the gaming company Raysol Games in 2016

The origin of the company name is that it sounds like "rare soul", pronounced quickly; it means that we hope every team member can have a rare soul, bringing in unique ideas to help create work like no other.

We created Dungeon Balls because we wanted to make a smartphone game that caters to Japanese players.

When we were searching for suitable themes, we found the locally well-known traditional physical game of pachinko. Then we came up with the idea of combining the feeling of winning prizes with killing monsters through simple replacement.

In addition, we drew beautiful manga style comics specifically for the game’s storyline, hoping that our players can understand more about the story and the personality of the characters.

For an indie team, getting recommendations from platforms like Google and Apple is the most important thing, because indie teams severely lack marketing resources.

I have met many indie developing teams in Taiwan over the past two years, and nearly half of them disbanded after a year because they didn't have enough revenue.

My company also ran into serious financial issues after the first six months and the only thing I could do in those desperate circumstances was to let my employees go and keep on developing new products on my own.

Actually I had experience of making several pitches before the Big Indie Pitch. It is essential to be fully prepared with the speech, but what’s more important is that I practiced my speech many times, and there were several things I found particularly important.

For example, the introductory stage must fully convey the fun of the core gameplay; it has to present the features of the game, such as the building system, the interactive decorations and the beautiful in-game comic, all within a short period of time.

I think these are the key factors that helped me stand out among many excellent products.

This was my first time introducing a game in Chinese and English in front of judges from different countries. I did feel a little nervous during the pitch, which made me talk faster and faster. I hope I can overcome this problem in the future.

I hope that we can continue drawing the comic for the storyline of Dungeon Balls, because I've prepared a lot for the story.

Regarding future projects, I am preparing a new title. It will be a beautiful painting game with great music. I hope everyone will like it.