"This business is built on love": How a spark of romance led to AppSir's meta-horror game Dere Evil Exe 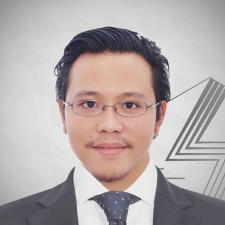 Darius Guerrero wasn't always enamoured by games and especially not those on mobile. Upon meeting Daphne Ayala, however, he felt inclined to discover what the buzz was about due to her fondness for them.

Not merely content to play them, the psychology graduate would go one step further and make his own mobile game with Daphne front and centre thereafter.

Thoroughly bitten by the developers' bug, the two would go on to create games as a hobby and form a studio called AppSir, with their personal fancy for horror becoming entwined throughout later titles. As such, AppSir's signature of thriller titles was forged.

The latest in the studio's line of lovingly crafted horror romps is Dere Evil Exe, a sequel to Dere Eve but more broadly connected to a wider universe of games that involves other titles Sorority Rites and The Last Yandere.

A meta-horror retro platformer, Dere Evil Exe subverts its retro inspirations while consistently breaking the fourth wall. While somewhat nostalgic and comedic at first it soon descends into horror as the game glitches and a mystery unravels.

For this week's Indie Spotlight we took the chance to catch up with Darius Guerrero to talk about horror and Dere Evil Exe.

PocketGamer.Biz: Can you tell me a bit about yourself? What brought you to games development?

Darius Guerrero: I graduated with a bachelor’s degree in Psychology and was working as a training specialist for a government program.

I didn’t have a smartphone then, so the idea that someone could get so addicted to these mobile games was still alien to me.

There I met this girl named Daphne who had a tonne of mobile games on her phone.

I didn’t have a smartphone then, so the idea that someone could get so addicted to these mobile games was still alien to me, but we started liking each other.

Eventually, I had the idea to surprise her by making a game starring her. I was so proud of my first game with her as the main character and I knew it was something I wanted to do full-time.

She loved it too. She was initially creeped out about it but she loved it nonetheless. Now we make games together.

How did Dere Evil Exe and the universe it’s a part of with Sorority Rites, The Last Yandere and Dere Exe all come about?

We started with one-tap endless games with the character running and jumping around with no story but we felt it just wasn’t for us.

We didn’t want to make these kinds of games anymore. Daphne insisted we make something with a story.

I won some awards for indie film contests back in college and realised I could tell a much better story with games. It’s much more immersive.

Instead of making one game with a story, we decided to craft a series of interconnected games with intertwined stories based on conspiracy theories about rogue AI, experiments on the digitisation of human consciousness, secret societies, mind-controlled human weapons and alien technology shaping the development of human civilisation.

There are a bunch of inside jokes in the game as well because we wanted to see how many people are geeky enough to spot them.

What inspired you to tackle horror? Do you have any horror-related inspirations?

Daphne and I are fans of horror movies, conspiracy theories and creepy stories. We spend a quarter of our dates discussing these stuff.

I’d say the inspiration for Dere Exe is that urban legend about an arcade game called ‘Polybius’ and an obscure website called ‘Annie’s Road’.

In terms of the delivery, I’d say it’s based on the ‘Saw’ franchise.

Not for the gore, but the pace at which terror unfolds and the plot-twist ending. This is why all the games in our universe end with a major twist.

Dere Evil Exe seems to subvert and maybe even parody a lot of games, what was your inspiration for doing so?

The inspiration comes from our innate desire to troll people testing our games.

The best ones haven’t even appeared in Dere Evil Exe yet, but will in the sequels.

There are a bunch of inside jokes in the game as well because we wanted to see how many people are geeky enough to spot them.

Sometimes Daphne and I play old games and we realise just how cryptic and archaic 90s games design was, so we wanted to incorporate that.

How difficult was it balancing meta-horror with meta-humour and how did you do it?

These two are incongruous emotions, but they can be felt at the same time.

Remember Hannibal Lecter’s “I ate his liver with some fava beans and a nice chianti” line? It was funny and horrifying.

That’s the philosophy we have when making a Dere Exe game.

Not a joke, but there were weird glitches and bugs. The platforms didn’t rotate at exactly 90 degrees and took a lot of energy drinks to get fixed.

Sometimes the iOS version behaved differently from the one we have on PC so we had to redo some levels.

The platforms didn’t rotate at exactly 90 degrees and took a lot of energy drinks to get fixed.

The 'dev' can be quite humorous when talking about how he designed the game, is that part a reflection of yourself?

Honestly, everything about the 'dev' in the games is a very close representation of who I am in real life.

Some of the conversations come from me showing the game to Daphne and asking if she liked the game now.

Me telling people that this game is better than the first one. Me explaining that games shouldn’t just be about running and jumping around.

I don’t think there’s much of a difference.

What is your opinion of the mobile market for indies right now?

I see that the opportunities for indies right now is better than the previous years.

The App Store with its editorial content and new layouts now have better ways of increasing visibility for games but are sometimes capricious in their app rejections.

Google Play has been making good improvements in editorial content as well, though their latest algorithm seems to be affecting a lot of core features such as the Similar Apps section, the displaying of categories, and the massive drop of impressions even for games that have good KPI.

Still, both stores are lightyears better than they were years ago and I applaud the constant improvements.

Now re-skinners, cloners and people who abuse the system are more often taken down and good games appear more often.

Real indie game developers that have a passion for the business have a better chance to thrive.

How do you feel about the launch of the game and what’s next for you?

I love how it was received.

This business is built on love.

It got a lot of downloads on its first day, reached the top of the charts quickly and big YouTubers were enjoying it.

The next iteration of ‘Dere Exe’ is in development and ‘The Last Yandere Part 2’ is coming soon.

But the most important thing on my mind right now is that the girl I made my first game for, Daphne, is now my fiancé and we’re planning to get married next year.

This business is built on love. Expect a tonne of games with interconnected storylines and twist endings for the next few decades.