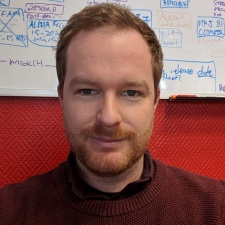 This week, we spoke to Dead Cells producer and Evil Empire CEO Steve Filby about the biggest challenges with creating a roguelike shooter.

Steve Filby: Luck. Pure dumb luck, actually. I was hanging out with a friend who knew someone that remembered my experience and how that lined up with a job opportunity from Motion Twin.

I sent in an application and turns out they like me enough to pull me in.

Well, I’m in the business and marketing front of Motion Twin as well as being the CEO of Evil Empire so I’m usually jumping around between a stack of different projects.

Today for example, I went over the game design of a bunch of new weapons that we’re planning to put into the game.

Then I discussed the potential of a new project collaboration between Motion Twin and Evil Empire (Hint: it’s Dead Cells related).

As soon as you pick up the controller it feels fun, though that’s hard to explain in a crowded networking party after three beers.

This was before sending a bunch of emails to Valve, Nintendo and more to organise different releases, talk about our product plans, and generally keep them in the loop.

On top of that, I translated some texts for the current update, talked about whether we should eradicate mosquitos from the planet with our programmers and tested out Bloodstained – all before 3pm.

Making users understand that the game was more than just “another pixel art rogue-lite”.

When we started, and even to a certain degree today, we had to convince people that Dead Cells was awesome, often without those people being able to test the game.

Dead Cells’ major strength is how the game feels. As soon as you pick up the controller it feels fun, though that’s hard to explain that in a crowded networking party after three beers.

Having trouble sleeping at night because I’m super excited about what I get to do at work tomorrow and having my team feel the exact same way.

It seems to me that if everyone is really happy in what they’re doing, that’s almost enough.

Obviously, that is all underpinned with having enough money to buy food and be financially successful along the way.

Incredibly tough. We got out of mobile games because when we really looked at the models that were working, we realised that we didn’t have the financial resources to be in the top 100 grossing games or the desire to do what it takes to get there without a $100 million budget.

Having said that, Apple Arcade and so on seem to be helping drive the creation of a new wave of serious non-cash cow experiences on mobile.

We’ll see if the Netflix model pans out for developers over time, but I have my doubts.

Nope, top secret. The one that we can talk about is Dead Cells, with the latest update currently in beta and we’re super happy with how it’s coming along.

We’ve added a new mini biome (level) in the game, as well as a bunch of other features that people seem to be liking it for the most part.

The same thing we do every night: Try to take over the world!

No, actually we’re working on a lot of cool things but for the minute basically producing more Dead Cells content, helping Motion Twin where we can on their next project and then building out our team so we can start on a new game of our own too.

Actually, I have a game design idea that I believe would work really well, incorporating hundreds of thousands of people online at once, that intrinsically links to streaming and a number of similar things.

It’d be cool, I swear, but we’re not ready to build that yet.

Think about what you’re going to build before you build it.

Your paint drying simulator might sound awesome to you and your mum but is there really a market for that?

Honestly, it’s the hardest thing that I have to say to other indies when I see their launches fail.

At the end of the day, the problem with a lot of them is that they created a game that wasn’t really designed with an audience in mind, so no one played it.