Indie Michal Pawlowski on finding a fresh, happy mind to come up with OXXO 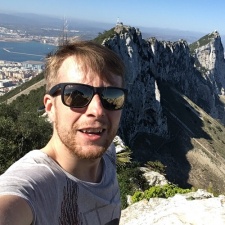 This week, we spoke to Hamster on Coke designer Michal Pawlowski about how the indie firm got started as well as its newest release in the form of minimalist puzzler OXXO.

Michal Pawlowski: I took a basics C++ programming course and after a year I moved to creating small games in Corona2D. It turned out to be super fun, so I started to spend most of my time creating silly games and prototyping a lot of different ideas.

Thanks to the course, I also started to work in the IT sector, quickly moving to develop Android apps for a small start-up company. Our first releases were not successful, for the simple fact the games were not good enough, as I was trying to copy ideas of top market games.

The turnover came at the moment when I understood that success doesn't lie in proper ads implementation, integration of leaderboards or other tricks. People love playing good games. Once I started creating original games, I was able to go full-time indie.

You may be really surprised, but I don't spend a lot of time creating games. Mostly I paraglide, snowboard or climb, taking my liberty to move freely around the world and get the most of my life.

But then it gives me the time to think about new game ideas, level design problems I'm currently facing, or mechanics implications that are yet to be discovered in the game I'm creating.

Being a solo dev takes the pressure off me. There's so much more to life than just the sole pursuit of money

So how long do I code for? Well, there are weeks that I don't code at all. There are also weeks that I code for 12 hours a day. I don't have an office and I haven’t hired anyone. It gives me so much freedom once it comes to finding ideas.

I found that good ideas come from the fresh, happy mind. I know that many small indies struggle to release a new game or they'll go broke. Being a solo dev takes the pressure off me. There's so much more to life than just the sole pursuit of money.

For me, mental challenges are always the worst. Finding a new game idea that's really good and being able to spend a year creating it is always a painful process.

This often takes months of prototyping before I discover the idea I'd fully like to commit to. And during these months, there are moments of misery and denial where I believe the games I have created before were pure luck, though this is a struggle of every artist. It's also a great time to learn how to meditate, so I can keep my mind calm and relaxed.

Recently I received a message from a mother of an autistic child, thanking me for creating Zenge, as it's the game that helped the kid to finally open up to the world. The child loves to play it over and over, and has started to open up cognitively. Now he has begun to reach out to other people as well as beginning to properly develop mentally.

I love the fact that so many people started to create games, as it shows how many new ideas are still yet to be discovered.

I don't know why the small game I've created made such a huge impact on this kid but the fact that I actually helped someone, gave them a smile, joy and happiness is unreal. After receiving this email, I burst into tears. This is the closest to "being successful" I've ever got.

It depends. I personally hate ad-based games that destroy the experience. I know there's a lot of people that have similar feelings too, so it still makes someplace for good premium games.

I love the fact that so many people started to create games, as it shows how many new ideas are still yet to be discovered.

There are big changes with Apple Arcade and Google subscription services. Both might be a game-changer for great indie games but only time will tell.

OXXO - the last game I released came from the simple idea of rotating domino blocks against each other.

It was clear from the start to the end what this game is going to be and what kind of puzzles are possible to achieve with this set of mechanics.

It's great in its own genre. I believe it's a really well-balanced puzzle game. Sometimes easy, sometimes challenging but very well-paced. There are a lot of new ideas being thrown at the player every moment.

I believe I know how to properly explain the idea of the fourth spatial dimension through a puzzle game.

Tesseracts, multi-dimensional creatures’ cooperation, mind-bending graphics and a meaningful story to be told. However, in the meantime I'm porting my old games to Nintendo Switch.

Be different. Don't rush into creating the first idea that comes to your mind and be really critical about them. People love to play games they've never seen before. Remember that. There's no need for great marketing strategy or tons of money for advertisements