“Spin Rhythm makes use of all the available inputs and gestures of a touch screen to make players feel like they are inside the music, almost composing as they play like some interdimensional DJ” 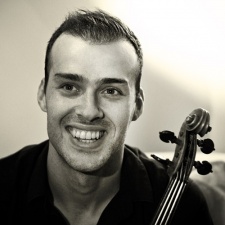 You never know what you’re going to find when you attend one of the games industries many trade events, but there’s usually a good chance you’ll discover something.

Super Entertainment’s booth in PAX Australia’s crowded venue is snuggly fitted between two others among the other local indie developers, with all three displaying a similar retro aesthetic with vibrant and punchy tones of blues and pinks.

The Melbourne-based developer is showing off Spin Rhythm, a fluid, analogue controlling EDM space adventure where players spin a wheel to match colours, beats and musical lines. Set to modern melodic electronic music, the game boasts a sense of energy that makes it comparable to both Guitar Hero and Dance Dance Revolution in spirit and visual.

The game is by all accounts a good time. There is a DJ-rig set up which takes any players disk-jockey fantasy to the next level, and plenty are keen to indulge.

It wasn’t until we tried the beta on mobile, however, that it genuinely stuck with us. The rhythm game retains that same shot of energy but transports it to your pocket and lets you take it on the go, making for intimate and personal play sessions that run hand in hand with your headphones.

The game feels notably satisfying too. Despite the rhythm genre having some lineage with toys-to-life, like DJ Hero’s deck and DDR’s dance pad, it still feels at home with none of that on mobile.

It’s no coincidence that tapping, holding and flicking feel so in tune with Spin Rhythm, however, with two of Super Entertainment’s trio, Stephen last and Shath Maguire, coming from Fruit Ninja developer Half Brick.

Super Entertainment came together in 2016, with its first effort on mobile Steppy Pants coming soon after. Part QWOP, Flappy Bird and Crossy Road, it was downloaded over 20 million times.

Talking to PocketGamer.Biz, Super Entertainment’s Dave Curro tells us that its follow up Spin Rhythm wasn’t always a rhythm game and initially had more in common with its predecessor than meets the eye.

“Spin actually started as a puzzle game where players matched three colours to a wheel in the centre of the screen,” Curro says.

Part of the charm for us was being able to bring your own midi turntables and drum pads to the game, breathing new life into your equipment

“When you look at the game it is instantly familiar. Notes coming down a track matched to music, requiring timing, speed and skill to match.

“Spin Rhythm makes use of all the available inputs and gestures of a touch screen to make players feel like they are inside the music, almost composing as they play like some interdimensional DJ.”

While games like DJ Hero and DDR are a reference point for Spin Rhythm, Curro tells us that the temptation to include a turntable-like controller was never forthcoming, with the toys-to-life element in games notably off trend.

“Part of the charm for us was being able to bring your own midi turntables and drum pads to the game, breathing new life into your equipment,” Curro explains.

“Maybe we’ll even have a Post Malone story in a few years, where some huge DJ superstar gets into EDM production and DJing because of Spin Rhythm. That would be sweet.

“If the demand is there we would probably consider a custom controller. We’ll have to wait and see as it’s a huge undertaking and we would want to do it right.”

Spin Rhythm is currently slated for release across a few devices, from iOS and Android to Nintendo Switch and Steam on PC.

If you enjoyed the experience of using the turntable set up at any of the conventions Spin Rhythm was set up in, or if it’s something you would like to do anyway, you can should you have your own gear.

Although, if you’re thinking of using the DJ Hero controller then you will need to hold fire.

“The game can pick up midi chatter from basically any midi device and map it to in-game controls,” says Curro.

“We don’t have release-level calibration tools in the game yet (it’s pretty alpha right now), but we’ve had awesome success so far with midi gear (something like seven or eight devices across a range of brands).

“When we were showing at PAX West in Seattle in September our bags never arrived from the flight between Cologne and Seattle.

Teaching players new mechanics in a genre that is so familiar is really tricky.

“The bag contained our DJ controllers and Roland SPD drum pad. We went to a local music shop the day before PAX, bought a Pioneer Serato, plugged it in, and it just worked.

“We were so relieved as you can imagine, so we’re pretty confident now being able to say that the midi gear will have a good compatibility rate on the PC version.

“And sadly no, the DJ Hero controller doesn’t work very well for Spin, the wheel doesn’t pick up a tap which is super important with the way our game is designed.”

Creating something within the rhythm genre poses a set of challenges to balance out, however. The style itself is well established so introducing new mechanics requires careful implementation.

According to Curro, striking that balance gave the team there biggest design dilemma with Spin Rhythm.

“Teaching players new mechanics in a genre that is so familiar is really tricky,” he says.

"So, not having a proven gameplay system we can reference in other games for the core mechanics means we have to do a lot of trial and error, a lot of testing and a lot of tweaking until it feels just right and works how you expect.

“Hand-making levels also requires a lot of patience and a good sense of balance between the difficulties.”

Curro goes on to tell us that the key to overcoming those challenges is part trial and error and part trusting your own sense of what is fun.

“Having similar taste amongst the team really helps when there is a possible divergence in design,” says Curro.

“Make sure everyone is on the same page and decisions will be easier. It’s good to be able to balance passion and ego also.

“Anything that ends up in the game has to be for the greater good of the game and your audience, not just because you thought of it or personally like it.”

Spin Rhythm is currently pencilled in for a release on mobile in early 2019, which should be January or February.

I think it’s much harder to be found now on the virtues of being a good game alone.

Beyond that, Curro explains that plans are in the pipeline to create a premium version for Switch and Steam, and even a VR and an arcade version beyond that.

Regarding making it on the mobile market, however, Curro admits that the scene is tough but that any game can enjoy a long life with the right support.

“I think it’s much harder to be found now on the virtues of being a good game alone,” Curro explains.

“It takes a great idea, well-executed with good marketing support.

“There are so many more players though and growing every day. People are hungry for good, original content that uses the platform well.

“Games can also have really long life cycles on Mobile, and with the right support, a developer can carve out a nice niche for themselves, build a community and stay busy for years.”