Q-Games founder Dylan Cuthbert on the allure of Apple Arcade

"We are developing another Apple Arcade title" 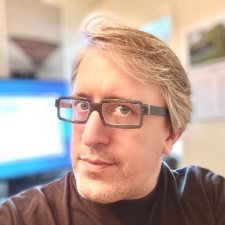 This week, we spoke to Q-Games founder and president Dylan Cuthbert about how the studio ended up making Scrappers for Apple Arcade and why another game is already in the works for the platform.

Dylan Cuthbert: I began making games as soon as a friend’s Dad loaned me his Sinclair ZX 81. I started by making a bad clone of Pac Man, which was all the rage in the arcades at the time.

Some indies turn to Twitter and build up followings with controversial tweets...

Of course, I wasn’t a modern indie game developer until I decided to branch out with the PixelJunk series, beginning in 2007 with PixelJunk Racers and was one of the first indie games to appear on PSN. PixelJunk Racers was followed quickly by the beloved PixelJunk Monsters, the new modernised mobile version of which is in soft launch right now in Ireland and New Zealand.

I wake up and play the latest builds of our various games, read feedback from everyone, and then go back-and-forth with the teams building up our ideas.

As an indie, I of course have to do PR and business development too. Every day is hectic but a lot of fun. I dive into programming, art direction, game direction, and various experiments, all the time. On non-Covid days I also like to go out for a beer with people too.

Success is when you’ve made something you are satisfied with, and at the same time, the players of the game are also loving it. The Tomorrow Children wasn’t quite the financial success we expected because the plug got pulled too early, but the core players absolutely loved it, and I did too so it was a success in my mind.

It’s still very tough. We have Sticky Bodies and Eden Obscura out there now - both are very different games and both are very high quality (and have great soundtracks!) - but persuading people’s eyes to be pulled away from the titles with heavy UA spend is really really tough.

Some indies turn to Twitter and build up followings with controversial tweets, building up a fanbase with their internet persona before their games even get released. That’s a full-time job right there though, as you have to sell your soul a bit to engage in Twitter in that way. Always being controversial and outspoken is hard work.

Could you tell us about Scrappers, and why it felt right for mobile?

On mobile, we are developing another Apple Arcade title but I can’t say more about that yet, except that it is cute, addictive, and a ton of fun!

We had a demo of Scrappers and it was looking fun, but the main reason we went mobile wasn’t that it was mobile per se, it was because of Apple Arcade. With the service available across Apple TVs, iPads, iMacs and other Apple devices, it seemed to us to be a really fun proposition.

Instead of competing with free-to-play, we could make our game available on a bunch of platforms simultaneously and support regular gamepad controllers on all of them.

We showed them our internal demo and specification, then explained what we wanted to do. Apple loved the art style and the slightly retro 16-bit era feel of the game, so they greenlit it.

Apple didn’t know that one of our teams was also working on Frogger in Toy Town for Konami (that also got greenlit at around the same time too) meaning that all of a sudden we were making two games for Apple Arcade. Funny enough the second game I tried to make on my friend’s dad’s Sinclair ZX 81 at the age of 10 was a Frogger clone, so that project was a chance in a lifetime for me.

We are doing very nicely, with the majority of people working from home. Game sales don’t seem to be affected much, so that’s a good thing! I think there is going to be a lot of rebuilding next year though and I worry about how that will affect all of us.

Well, in a few months we are going to launch the latest game in the PixelJunk Monsters series - Trouble In Paradise, which will release worldwide on iOS and Android.

We have PixelJunk Eden 2 coming out for Nintendo Switch this Winter too, and we are launching Sticky Bodies in China through a partnership with Yodo1. We are doing lots of research and development now to try and decide what to make in 2021, so watch this space.

On mobile, we are developing another Apple Arcade title but I can’t say more about that yet, except that it is cute, addictive, and a ton of fun!