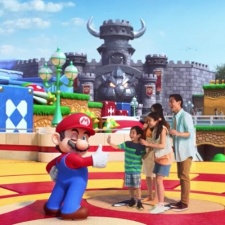 During a press conference regarding the theme park, which was tweeted about by Bloomberg reporter Kurumi Mori, it was confirmed that wearable wristbands called "Power Up Bands" will be given to visitors which will then work alongside a dedicated smartphone app for the park.

The mobile app will provide locations of rides as well as offer interactive elements from the world of Nintendo, such as collecting virtual coins and battling bosses.

The park was described during the presentation by Universal Creative chief creative officer Thierry Coup as "a life-size, living video game."

To celebrate the announcement a video showcasing what the park will look like was premiered. Guests are seen running and leaping around the environment while Mario enemies try to catch people before reaching the flag pole.

Several potential rides are spotlighted, including a Mario Kart ride that has now been confirmed as being in the works.

As part of this, an official Super Nintendo World theme song from artists Galantis and Charli XCX was debuted, with the latter appearing in the theme park trailer. The two have collaborated for 'We Are Born To Play' which incorporates sounds from the Mario series as well as hints to 'Jump Up, Superstar!' from Super Mario Odyssey.

Super Nintendo World is due to open this summer in Japan as part of the 2020 Tokyo Olympics, before rolling out to other locations such as Florida, California, Hollywood and Singapore at later dates. The park was first unveiled back in December 2016, when it was estimated that the Japanese park alone would cost $433 million to build.