No definite price or release date yet 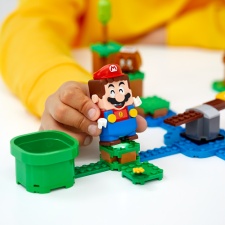 Far from being a traditional LEGO set, the Super Mario collaboration will feature an interactive LEGO Mario figure with an animated mouth and eyes, and a chest TV which displays a timer, how many coins he collects, and so on.

The sets will allow users to build their own real-world Mario levels, complete with enemies to stomp, hidden coins to collect, and a flag to reach, just like in the games. LEGO Mario will make various noises as players move him around the world.

No definite price or release date has been revealed yet. Below is a new trailer for the kit.

LEGO and Nintendo are teasing a partnership featuring the developer's flagship hero Mario.

The partnership was revealed on Twitter, where a short video was released of a LEGO character in the shape of Mario. Both the LEGO and Super Mario logos are shown at the end.

It is unclear what exactly this partnership would entail. It is likely to be a new physical LEGO product line featuring Mario worlds and characters, though the toy giant is also known for releasing games.

Mario and co. have appeared in non-Nintendo developed titles before, most notably in the recent Ubisoft Switch title Mario + Rabbids Kingdom Battle, so a TT Games-developed LEGO Mario game is not completely beyond the realms of possibility. That said, the studio hasn't shared the Twitter announcement, so it is unlikely to be involved.

This isn't the first slightly odd partnership Nintendo has announced this month. On March 4th, Levi's revealed it was partnering with the Japanese developer to create a new clothing line based on the mustachioed hero.

It certainly makes sense for Nintendo to be licensing its brands out to new avenues - after all, it needs to diversify its portfolio more now that its Switch console makes up 96 per cent of its revenues.