It will be released on August 1st 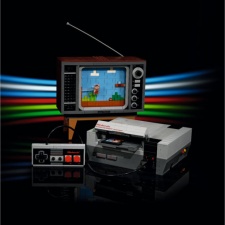 Nintendo and the LEGO Group have built upon their partnership with a new Nintendo Entertainment System (NES) LEGO set.

The new block building set is aimed at adults, not only does it feature the classic console, but consumers can build a replica NES controller and a 1980s TV set for a true nostalgic trip down memory lane.

Furthermore, on the TV screen, an 8-bit Mario picture can be found on the scrolling screen. Those who have the LEGO Mario from the Super Mario Starter Course can scan an included action brick. As a result, Mario will react to obstacles and enemies on the screen.

The LEGO NES will go on sale from August 1st through the company's website and retail stores. However, the product will be available through third-party retailers from 2021. It will set buyers back £209.99 ($229.99).

"Super Mario has been a cherished figure in the gaming world for over thirty years now. Many adults still fondly remember that first time they saw Mario leap across the small screen, even if the graphics were a lot simpler than they are today," said the LEGO Group creative lead for the LEGO Nintendo Entertainment System Maarten Simons.

"With the LEGO Nintendo Entertainment System, we're letting them truly indulge in that nostalgia, recreating one of the most-loved consoles of all time so they can see the Super Mario from their childhoods once again – and even to share the experience of gaming in the 1980s with their own children."

In April, the LEGO Super Mario Adventures Starter Course became available for pre-order with a release date of August 1st. Furthermore, two expansions were announced – the Piranha Plant Power Slide Expansion and the Bowser's Castle Boss Battle Expansion Set. However, these will be released at a later date.