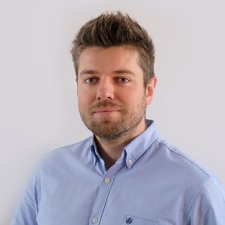 Jonathan Bennink is the digital design lead on LEGO Super Mario at LEGO.

Some announcements are leaked months in advance. Some are teased by companies until a full reveal is given. And some, like the upcoming LEGO Super Mario sets, come straight out of nowhere.

At the beginning of March earlier this year, Nintendo and the LEGO Group partnered together for the first time to transform the world of Super Mario into bricks. Combined together, the giants have 215 years of experience creating toys and games for all ages, making some wonder why it took so long for the two to join forces.

Unlike traditional LEGO brick-based sets, LEGO Super Mario is a new product line that features an interactive LEGO figure of the heroic plumber who collects coins via real-life levels created by the LEGO bricks. The unexpected announcement generated a huge buzz across the web, with many welcoming the Japanese game maker experimenting more out of its comfort zone.

It's easy to forget that there is already a Nintendo theme park and a Mario movie from Illumination in the works, so why not take a shot at a toy line? It's something The Pokémon Company has done successfully for years and something that the LEGO Group has been trying to make happen for quite some time.

"Both LEGO and Nintendo have a lot of branches and they naturally crossed paths one way another with games and licensing, but finally, the right types of people met," LEGO digital design lead Jonathan Bennink tells PocketGamer.biz.

"Our team has been working on this for more than four years," he says.

"We came up with LEGO Super Mario, with LEGO Mario being the main star of the show. He's your friend, you can bond with him, shake him about... The main thing you can do is build levels out of your imagination, and anything between the Start Pipe and the Goal Pole is the level."

The unusual design of Mario and friends is something that straight away grabbed people's attention, with a lot of this down to how animated the character looks.

"We've put a lot of effort into his expressions," says Bennink.

"We have one designer whose sole job is to make him come alive. We tried 10 to 15 shades of blue to try and get it perfect, in true Japanese Nintendo spirit. Everything from his different facial expressions, to his eyes, to his mouth, to his belly screen that displays game information."

The beauty of this experience is that the core game loop is with the bricks and your hands, not with the app

Naturally, out of all of Nintendo's catalogue, Mario is the go-to when launching a new product line, but the gamification aspect was new to LEGO. The team struggled at first, initially making a lot of "motion type" games, where a child would run around the room with characters, taking inspiration from the Wii era.

"Initially, we had two teams who worked in a massive break room," Bennink says.

"About 25 ideas popped up. A very wide range, which we boiled down to eight categories that we then let management vote on it. One of the categories was to have an interactive character."

The main issue encountered during development was that it didn't feel like LEGO. There was no putting bricks together, only a single brick on the plumber's head. This was a "really low point" for Bennink and the design team, when pointed out by the son of LEGO's owner during a presentation to management.

"That was a really close call," remembers Bennink.

"But then we luckily came up with the Start and Finish course, where you play through a level as Mario. It then kind of evolved into a physical Mario Maker. We then really put in the LEGO DNA where the player [is] building things out of your imagination and it's us not telling you what to do."

Alongside the physical product, an official Super Mario LEGO app will launch on iOS, Android and Kindle devices simultaneously, allowing builders access to more features. Developed by Ustwo's Sweden studio, the app will update Mario as the year goes on or if expansion sets are purchased. Most importantly, it's to help enhance play and guide players through the experience, if needed.

"We put out these principles for the app: It should teach you how it works, it should inspire you, and it should be a place to store your levels," Bennink says.

"After you build it and you're proud of it, you might be hesitant to pack it up. Having this photo album section attached [to the app] gives you creative permission to break it all up again."

Bennink adds: "There are plenty of apps and games out there that ask you to go from level to level and unlock things within. The beauty of this experience is that the core game loop is with the bricks and your hands, not with the app."

All of this technology comes at a price, though. The Mario Starter Course is priced at $59.99, and all ten of the LEGO Mario expansion sets, when combined with Character Packs and Power-Up Packs, come to a total of nearly $600. Is this something the company is predicting will be picked up in full?

"No, of course not," laughs Bennink.

"The big challenge with the price point and this project was that there is a lot of technology within, and we wanted to make sure that Mario is available for as many people as we can. That's why we've fought tooth and nail to keep the price of the Starter Course as low as we can, but still offer a taste of the experience.

"We imagine people have their favourite character or favourite place from the game that they want to expand with, so we expect them to buy maybe two or three sets of those characters or worlds."

Unlike a lot of properties undertaken by LEGO, Nintendo fans come in all ages. Passionate to say the least, it's families that are actually expected to be the main target audience for Super Mario set – specifically ages "six plus and fans of Mario and LEGO," according to Bennink.

"Both LEGO and Mario have been passed on from generation to generation so we expect a lot of family play to happen."

"Hopefully kids might make levels for their parents to try for when they come home from work."

LEGO has several internal KPIs to consider this collaboration a success and while the future of the partnership is unknown, the biggest metric for him comes from audience response.

"What I'm looking for is that excitement from the audience and if this toolbox approach which we've created is going to resonate with kids," he explains.

"If there's a community forming around it where kids and adult LEGO fans can inspire one another and keep building. If it can become this family household toy that inspires creativity."

As the launch date of August 1st nears closer, it's impossible to ignore the massive pandemic that has swept the world, affecting manufacturing, shipment, marketing and everything else. That said, LEGO Super Mario seems to have come out unscathed for the most part.

We've been cooking this in the basement for four years, so we really want to see what the world thinks

"It's been a very strange time for everyone in the world," Bennink says.

"It affected our announcement plans a lot because we would normally gather press together for a hands-on demo, where you can feel and see the product. The announcement definitely has changed with these online events where we invite people to come in for talks that we would have done previously in person.

"This makes it tricky, as you only feel the magic when you are holding this little guy, when you look him [in] the eyes and see him being alive. So that's been quite a challenge.

"I think we're very fortunate that the actual launch date hasn’t moved. That was always the launch date, years and years ago, at least what the project team was planning. We're very lucky that the factories have started up again, so we won't have delays."

With Mario on the way, one could take a guess that conversations are ongoing about what other Nintendo's IP could receive the LEGO treatment. A Zelda set? Fire Emblem? Metroid? Bennink would love to see a Star Fox set for one. Then after that, could we see the two companies go big on a game or even a movie?

"There are no plans in the works at this point but it's us going out on a limb trying to do something new," Bennink states.

"We'll have to see how it resonates with our existing audience and new audiences and see what people think about it. We've been cooking this in the basement for four years, so we really want to see what the world thinks. It's time to sit back and enjoy the show."

Summing up the possibility of further collaborations, Bennink says: "We haven't worked this hard for this one single product launch, so we do look forward to collaborating further with Nintendo in the future." And with that, it would seem the brick sky is the limit.