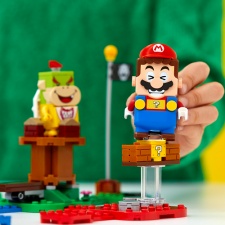 The LEGO Group and Nintendo have teamed up for a new interactive Mario product line, which features a Mario figure that collects coins in real-life game levels that are created through the use of LEGO bricks.

The Starter Course is needed to play Super Mario Adventures. Furthermore, expansions for the game will be released at a later date, the first of which has also been revealed – the Piranha Plant Power Slide Expansion and the Bowser's Castle Boss Battle Expansion Set.

The Starter Course will be released on August 1st for $49.99. Furthermore, the Piranha Plant expansion will cost $24.99 while Boswer's set will set you back $89.99.

“Fans have been keen to learn more, so I am pleased that today we were able to reveal more details about this exciting new collaboration that has led to a reimagination of the LEGO building experience and an entirely new way to play inspired by the beloved video game icon, Super Mario.

"We can’t wait to see fans get creative and challenge each other with this highly engaging and social play experience.”

Into the real world

"Super Mario has continued to appear, always in a form adapted to the current hardware of the time," said Nintendo executive officer and game producer Takashi Tezuka.

"I am thankful that in this project with the LEGO Group, Mario is jumping out of the digital world of game consoles and smart devices, and we are able to bring him into the world with a new, physical type of Mario play.

"It's very exciting to think of LEGO Mario becoming a real friend to children and to picture them playing in their very own Mario world that they imagined themselves."

A mobile app will be made available to not only keep track of scores but to be given digital building instructions.

LEGO and Nintendo first teased their partnership last month. On top of this, Nintendo teamed up with Levi Strauss & Co for a Mario clothing range.