Character and power packs will be available too 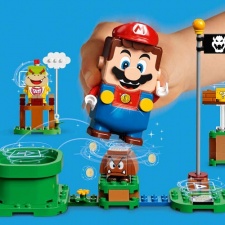 Nintendo will launch more LEGO Mario sets at the start of next year.

As detailed on Twitter (below), the Japanese firm will release a new Master Your Adventure Maker Set. Furthermore, there will be a range of expansions available too.

On top of this, Nintendo will also launch new power-up packs as well as character packs. All of these products will hit the shelves on January 1st, 2021.

Back in March, Nintendo unveiled its interactive LEGO Mario set. It was released, alongside two expansions, in August.

However, it is not just LEGO that has gotten the Mario treatment this year. To mark the Italian plumber's 35th anniversary, Nintendo partnered with Hasbro for Jenga and monopoly sets.

Moreover, a partnership was formed with Puma in September to release Mario-inspired trainers.

Meanwhile, perhaps what got fans the most excited was the Super Mario 3D All-Stars collection. A trio of hit Mario titles – Super Mario 64, Super Mario Sunshine and Super Mario Galaxy.