Mario appears to have teamed up with Puma for Mario trainers 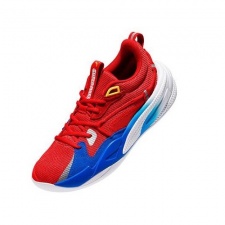 It looks as though Nintendo and Puma are set to team up for some exclusive Mario footwear to celebrate the Italian plumber's 35th anniversary.

As reported by Nintendo Life, a pair of Super Mario trainers popped up on Footlocker's website in Australia. Naturally, the footwear is sporting the red and blue colours strongly associated with the Nintendo mascot.

However, since the product was spotted, the webpage for the trainers has been taken down. Not before the world could get a good look at them through Twitter though.

Puma is not the first company that Nintendo has formed a partnership with as it gears up to celebrate Mario's 35th anniversary. In July, the Japanese publisher teamed up with Hasbro on two pieces of Mario merchandise, a new Monopoly board game and Jenga.

Moreover, in March, Nintendo partnered with Levi's to release a clothing range dedicated to the famous mascot. That same month, a new interactive LEGO set was unveiled. However, perhaps the most exciting prospect for fans is the possibility of having Mario games remastered for the Nintendo Switch.

Nintendo teams up with Levi's for Mario clothing and accessory range