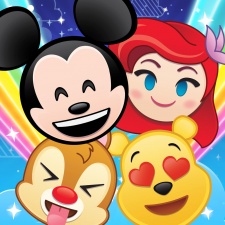 Jam City has launched its match-3 title Disney Emoji Blitz in Japan after the game's success in the US.

So far, the game has been downloaded 30 million times worldwide. The title enables players to collect and share Disney, Pixar and Star Wars characters spanning over 90 years.

"Jam City is thrilled to develop and publish this amazing Disney title which has been a runaway success in the US, and announce that we're bringing Disney Emoji Blitz to Japan, the second-largest mobile gaming market in the world," said Jam City CEO Chris DeWolfe.

"The appealing art style, cute emojis, and blitz style gameplay make Disney Emoji Blitz the perfect game for the Japanese market, with fans clamouring to get their hands on it.

"The game captures the excitement and the magic that only Disney, Pixar and Star Wars can, and now millions of Japanese fans can share in its unique universe and experience."

It will be available on both the App Store and Google Play.

Over the past year, Jam City has forged a tight partnership with Disney. The companies first agreed to team up back in November 2018. A year later, in November 2019, Jam City launched Frozen Adventures.