Will bring Nier Automata event back to Nier Reincanation 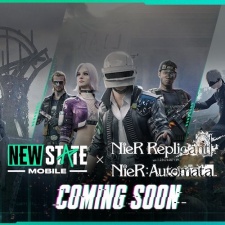 Krafton has revealed a partnership with Square Enix for a collaboration between mobile-exclusive PUBG New State and the NieR series.

The partnership comes as NieR Automata, the second game in the series, celebrates its fifth anniversary.

Details of the partnership are yet to be disclosed, however, it will likely include in-game skins and items, akin to previous collaborations with IP including Arcane, Jujutsu Kaisen, and more.

This marks the second collaboration for PUBG New State since its launch in November 2021, with the first being a partnership with Bugatti Rimac to bring its latest car model into the battle royale.

Square Enix brought the NieR series to mobile in February 2021 with the release of NieR Reincarnation on iOS and Android. As part of the fifth anniversary, Square Enix is bringing a previous NieR Automata collab back into Reincarnation.

Earlier this month, Krafton reported that it reached record high revenues of $1.57 billion for 2021, a rise of 26 per cent, with the release of New State and Battlegrounds Mobile India being key drivers.