Indie Spotlight: Brad Erkkila on Castle Pals and bringing a background of visual design to mobile

"As long as I can live pretty well and I can make the games I want to make, I consider that success." 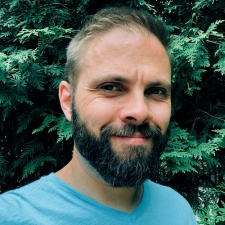 The creation of games is often a myriad of different elements from visual design to crafting the game’s mechanics.

As such, games development hopefuls can find themselves crossing over from many different career paths from graphic design to software engineering, like Gorogoa creator Jason Roberts.

For this week’s edition of the Indie Spotlight we caught up with indie dev Brad Erkkila to chat about life in the indie scene and coming over from ad and poster design.

You may recognise him from arcade titles Golf Zero and Touchdowners, which have both snagged over one million downloads on iOS alone, according to the man himself.

Brad Erkkila: I’ve always enjoyed playing games on any platform. When I was first starting out, I had a day job that occupied a lot of my day.

Naturally, with long work commutes on the train, I started playing more mobile games. I started thinking that maybe mobile games were something I could experiment with. I began researching tools and discovered Stencyl and liked it a lot.

I slowly worked my way through their tutorials until feeling comfortable enough to make something.

What is a typical day in your life right now?

Since I’m now fortunate enough to do this full time now, I work from home on my games.

I’ll take my son to school then just get cracking with whatever needs doing on my task list.

What was transitioning from ad and poster design to games design like?

From an artistic standpoint, my experience has come in handy. Having a grasp of ‘what looks nice’, at least to me, has translated well to another medium.

All the other aspects the go into creating a game came much more slowly. Making games is hard. When you do it alone or with a small team, you wear a lot of hats. The learning curve was steep but I’m glad I stuck with it.

Going from working in an office to being on my own was an adjustment. I worked in the fast-paced media industry, something fuelled by tight deadlines.

I had to create arbitrary challenges for myself to sort of kickstart a routine (‘How much of this game can I get done before the hockey playoffs start?’).

It might seem silly, but things like that helped. I also collaborate with other developers on things, specifically Colin Lane on Golf Zero and Touchdowners.

Having someone else depending on me to get things done helps give my days structure as well.

A lot of your work looks very fun and cartoon-like visually, did that lend itself to the kind of games you wanted to make?

I like to make things that kids find fun, regardless of theme or genre. Obviously, I’d like everyone to like my stuff, but watching kids play and enjoy what I do is the most rewarding.

I like to make things that kids find fun, regardless of theme or genre.

I think my work, especially lately, has been geared towards that. My arcade games include same device multiplayer, and I saw two kids playing It’s a Space Thing at a wedding once. It was great!

Could you tell us about Castle Pals?

Castle Pals is a platformer about two kids, Owen and Kylee, making their way through a most dangerous place - Castle Pookapick.

Each character has a specific skill and gameplay style which the player alternates between level to level.

In one level you can float freely using Owen's propeller hat and in the next you can smash enemies with Kylee's boxing gloves.

There are currently 40 levels including boss battles and I plan on adding more in future updates.

It's a semi-sequel to my first game, Owen’s Odyssey. Owen is based on my son and I’ve been telling him and his friend Kylee that I would put them both in a game together for the last four years.

I would say level design. It can be a draining, albeit rewarding, process trying to keep things fresh. Originally, the player was going to be able to switch characters instantly whenever they wanted. I discovered that designing levels to utilise that wasn’t ideal.

Owen could essentially avoid enemies, rendering Kylee’s fighting unnecessary. Deciding to split them up into two distinct level styles really focused the level design, thus moving the process along. Still a lot of work though!

As long as I can live pretty well and I can make the games I want to make, I consider that success.

I have a very supportive wife that also works full time doing something she enjoys. We work together to keep things going.

The market can be difficult, but I don’t think that’s anything new.

I have respect and admiration for indies who embark on ambitious, lengthy projects as I’m not sure I have the fortitude to do so myself.

Narrowing my scope and doing as much as possible on my own within 3-4 months puts less pressure on the game.

Fortunately, narrowing my scope and doing as much as possible on my own within 3-4 months puts less pressure on the game being a smash success.

From a creative and business standpoint, the middle ground is working for me. For now anyway! Exposure is always going to be an issue for someone like me who can’t afford meaningful UA, but Apple has been great about putting indies in front of people.

I’m working on Rowdy Wrestling with Colin Lane. Another ridiculous and wacky physics game inspired by wrestling from the 80s and 90s.

Expect neon tights and mullets. It’s releasing on July 19th. After that, I’ll be working on a follow-up to It’s a Space Thing.

Keep finishing things, polishing your skillset and become more efficient while doing it. You will get noticed.