Indie Spotlight: SMG Studio on going from Flash to Fast and Furious

"Know if you want to make games or run a business because sometimes the business side can get in the way of making games." 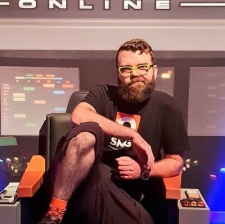 Ashley Ringrose is the founder of the Australian-based SMG Studio. Games released from the company include Death Squared and Fast and Furious: Takedown.

Getting your hands on a well-known property is what many triple-A studios dream of, never mind when you’re an indie developer.

Australian-based independent studio SMG managed to make this a reality when the company released Fast and Furious: Takedown for iOS and Android in November 2018.

Partnering with Universal Studios, Takedown lets players collect iconic cars from the Fast and Furious franchise before venturing on death-defying missions from the film's history.

Before all of this, the Oz-developer created such indie-darlings as skill timing title One More Line and colourful puzzler Death-Squared.

We spoke with SMG Studio founder Ashley Ringrose as part of our Indie Spotlight series about taking on a licence like Fast and Furious, how the studio made a name for itself and the difficulties of being an indie developer.

Ashley Ringrose: For me personally it was probably back in 1998 when I found out about Flash while studying design. I used to work graveyard shift (10pm to 6am weekends) at Kinko’s in Sydney, so when there were no customers/jobs I’d play around with Flash. I made simple Flash games and shared code on Flashkit.

Cut to end of 2000 and my Flash skills got me a job as a web designer/flash developer. I ended up making so many small Flash games we actually won a Flash Forward award for ‘Best Games’ in 2002 - beating out my idol Ferry Halim/Orisinal.

It was then I started my own business where I just wanted to make Flash games until we found out we’d make more money doing Flash banners so we also did those too.

Fast-forward to 2013 and we wanted to go back to making games full-time so I took part of my team and created a subsidiary which was SMG. We got some government funding on the company level and never looked back.

My life is probably very different from many as I’m studio head so I do lots of stuff and also nothing at the same time. I could spend the whole day looking at contracts and dealing with legal, while juggling the recruitment of new roles and looking over random elements of multiple projects.

I ended up making so many small Flash games we actually won a Flash Forward award for ‘Best Games’ in 2002.

One minute I’m buying this indoor plant thing for the new office, next I’m hitting submit in the Nintendo Developer portal for the Lot check. Now I’m talking to creators about a video while posting sassy tweets.

Sometimes I wish I had people for each part of my role but then we’d be bloated and no one would want to do some of the boring parts full-time. I feel satisfied knowing I’ve kept a lot of BS away from the people making the games.

The biggest challenge was just starting. We’d made two smaller games in our spare time before SMG with the same group but that took three to four years. Giving ourselves the runway and giving up the steady stream of client work was risky but paid off.

Other challenges are planning your slate and keeping everyone happy and engaged. Some projects are quite large and the least fun part is the last 10 per cent when you need to ship. Keeping that going while having people leave the team over time is tough.

To be honest it’s financially driven. To generate enough income on a game to make more games and provide a safety net for everyone so if we do stumble, we’ll be okay.

Success is always relative however. Whenever you reach a certain level you always look at what people are doing at a higher level and feel you still have far to go.

On a more personal level I was at Gen Con in Indianapolis last year having dinner in faraway restaurant in an SMG shirt and someone came over to say they liked Thumb Drift and fist bumped us. That in itself was an amazing feeling that no award has never made me feel.

It’s an ever-evolving market. I personally love it, but I also like smaller games. Being a dad means I get little time to sit and play the massive console games I used to. So, these little distilled experiences are nice. And there’s so many unique games being made that I think are overlooked by the craft in making something addictive.

There are a few big changes coming which I think will be good for the market. Or at least good for us. I think there’s no better way to hone your craft than to make a small mobile game. There’s a lot of creativity there.

Fast and Furious: Takedown is like Thumb Drift 3.5. We took what was an addictive game loop and expanded on it. Some ideas worked, others didn’t but we’ve learned a lot while working on this.

How big of a deal was it for the studio to obtain the Fast and Furious IP? Were you a fan of the movies before?

It was a huge deal. I mean I’m glad I have a legal team on retainer as that was a monster contract too. Working with an IP like this is very different to our own IP. Along with more restrictions also comes so much more opportunity. We were also able to work with NBCU’s partners across many other facets of the game.

Know if you want to make games or run a business because sometimes the business side can get in the way of making games.

As for the films of course, we were fans. I got to visit Dennis Mcarthy’s garage (Mcarthy provided the effects for a number of the Fast and Furious films) in LA and took a few of my car scene friends along. That was one of those certainly not your average day at work

We have a few projects on the boil right now. Fast is still in active development, our Melbourne studio is all on Moving Out for consoles, we have another un-announced game being started in Sydney and a bunch of prototypes just waiting to be finished.

RISK continues to do well for us and we’re maintaining/updating our existing portfolio of older games with a third-party. On top of this we’re bringing back a popular word game my former company was involved in a few years ago. We also just started a Los Angeles office because an opportunity came up to hire my old team from there.

Don’t put all your eggs into one basket. Whether that is a platform or a game. There are some great examples of studios built off one title but for us it’s about spreading the risk across multiple games. This might also mean making smaller games. That’s okay too. Think of it like an espresso; highly potent in small form.

Be straight up and honest with people. I’ve been in ‘business’ since 2002 and pride myself on doing what I say. It pays dividends in the long run. Although sometimes it feels like the good guys finish last, you’ll find that in the long run being someone who people can depend on will pay off.

Know if you want to make games or run a business because sometimes the business side can get in the way of making games. You’d be better off making games with someone else than worrying about tax forms and bills.

Try to understand why something is popular. Don’t snub your nose because it’s not something you like.

Look at it objectively and try to learn from it. This could be about games, fashion, movies, music or books, I mean anything. If there’s a trend, try to work out the why.

Finally, try to work for someone else before starting your own business. Learn from them, what do they do that’s good or bad?

Find out more about how to survive and thrive as a smaller studio in today's mobile games development market on the Indie Track at Pocket Gamer Connects Seattle on May 13th to 14th.