"The game originated from a conversation I had with my daughter" 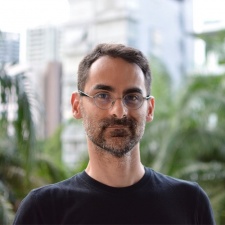 Wilfreed Trottet is the founder and animation director at Singapore-based indie developer Tendays Studio. He previously worked for Ubisoft France and Ubisoft Singapore.

This week, we spoke to Tendays Studio founder and animation director Wilfreed Trottet regarding the formation of the indie games firm and how a maths assignment from his daughter paved the way for Apple Arcade title, Tales of Memo.

Wilfreed Trottet: I've been working for 20 years in the games industry as an animation director and animation team lead for various companies, but mainly for Ubisoft in France and Singapore.

I worked on several triple-A games over there and it's been a great learning experience on so many levels. But after some time, the desire to develop more personal games was too strong and I wanted to work on smaller-scale projects and explore quirkier game ideas.

The adjustment period was painful but thankfully it didn't take too long, and I believe it helped us grow as a studio faster.

So, I decided to create my own indie studio here in Singapore. I started Tendays Studio as a solo developer because I wanted to be hands-on in all the different production departments for a change, and I spent the first eight months working on a dozen prototypes to identify the one that makes the most sense as a first project for the company. Then I contacted a few talented friends that I worked with over the years to join the company and work on Tales of Memo.

Our team works remotely and is scattered over several countries: Singapore, UK, France, the US, and Japan. With that, the company time spans over many different zones, so every team member has their own routine. However, the common ground is that communication takes a definite part of our time, which we keep short and effective.

Once we've synced up to discuss tasks/needs, everyone is free to work on their creative part and complete the tasks they have committed to. Within the team, my part is to handle game design, story, art, animation direction, and studio management.

My personal daily routine starts with catching up with the team messages on my phone during breakfast or while commuting. Once I'm clear on what needs to be done, I sit at my desk and begin. After 16:00, I usually take part in video calls with our European team who are just starting their day.

Probably the choice we made to become a remote studio, as it did get frustrating at times in the beginning, not being in the same physical space and being scattered across so many different time zones. Simple things could end up tricky like trying to explain a specific issue in the game, or even being able to reach someone because of an unforeseen dependency on a task.

It forced us to reflect on our processes, identify early on potential areas of friction, and plan properly. We then ended up spending some time adjusting in terms of communication frequency and medium. This is all naturally part of our normal habits now. The adjustment period was painful but thankfully it didn't take too long, and I believe it helped us grow as a studio faster.

The Singapore side of our team is hosted by a government-backed games incubator IMDA PIXEL. Besides offering us a working space, they also act as a hub for the local game industry and enable networking opportunities.

When we learned about Apple Arcade as a platform, our game was already running on mobile, with the demo being fully playable. We were wrapping up pitching materials before looking for a publisher, so we were super excited to have the chance to pitch it to Apple and show them what we were working on.

We shaped Tales of Memo as a family-friendly and ad-free game from the beginning, originally planning to release it in chapters. That would allow us to explore a different play-style in each chapter and develop the story over time.

Apple Arcade games being an ad-free subscription service with no in-app purchases made perfect sense for Tales Of Memo. That enabled us to develop the game the way we want it, without worrying about inserting monetisation.

I think every indie studio is torn between making a living and having total fun making the games they actually want. I must admit that we aspire to be challenged in every game while visiting genres and concepts that are new to us so that each of us can grow as individuals in our craft.

So, my definition of success can ultimately be summed up as having players enjoying playing our games as much as we enjoy making them.

The game originated from a conversation I had with my daughter who was struggling with her math school assignments.

The mobile market is a tough place and quite saturated. It's a challenge to simply have your game visible within the crowd. At the same time, because it is now the largest market, I think it is also the one where we can expect to see the most innovations – Apple Arcade is proof of that.

Monetisation can go so much against the desire to create an immersive experience, that it is liberating to be able to focus on making the game you want.

Could you tell us about Tales of Memo?

Tales of Memo is a memory-based puzzle game, where you accompany Memo and his friends on a journey through a frozen landscape, battling enemies using memory puzzles with cute graphics and animations.

You need to find pairs of matching spell numbers by opening chests on the board, and use them to attack and inflict damage to your enemy. It starts with simple levels, but as you progress the puzzles become more and more challenging and will test your memory skills, your basic math knowledge and your reflexes.

The game originated from a conversation I had with my daughter who was struggling with her math school assignments. I wanted to show her how logic and math can be fun to practice with - if shown in a more playful way. And it feels wonderful to now have players of all ages telling us they appreciate it.

Well, all the members of our team worked remotely since the beginning of our company, so the pandemic and the confinement that followed didn't directly affect our production flow that much. That being said, several of us were working in co-working spaces before the confinement, so developing at home is a new experience with some challenges for our work-life balance.

Personally, I am so tempted to jump to my desk any time I have some ideas for the game, or continue developing an exciting gameplay sequence. I often need to stop myself from overworking. However, we are lucky to be in an industry that allows us to work digitally. And we are grateful that we can continue doing what we love throughout this difficult time.

First, we are busy creating the next chapters of Tales of Memo. After that, we have lots of game concepts in mind that we'll prototype soon. We are not sure yet which one will be coming next, it will depend on the enthusiasm coming from the first playtests.

The current top candidates are a cat simulator, an adventure game with giant monsters, and an online melee with a twist. We want to continue having fun with exploring lots of different game genres.

We started the company because we had a humongous number of game concepts in mind that got us very excited. So, if we had an unlimited budget, the dream would be to explore them all.

There are so many sides to this question and no universal recipe for sure. If I have to pick one piece of advice; it would be nurturing your motivation for the long term.

Making a game is a marathon. The journey is long and tiring with motivation a key ingredient. Your game will only exist if you have the continuous strength and desire to bring it to life, which is true both for solo developers and within a team.

Treat motivation as another team member, make sure everybody listens to it, and give it enough space to work with you.