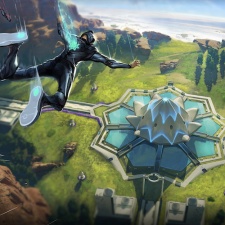 This week, we spoke with SuperGaming CEO Roby John about the development of the studio's upcoming cross-platform battle royale, Indus, and how it incorporates Indian culture and futuristic elements.

PocketGamer.biz: Where did the initial idea for Indus come from?

Roby John: The initial concept for Indus stemmed from a host of factors. For starters, we’re avid fans of shooters and battle royales – most of the team working on Indus live and breathe these genres. We were building our next iteration of our shooter platform along the path of building a scalable open world shooter platform. While iterating on concepts, the idea of Indus seemed a natural progression for us.

We noticed there were few battle royale games that put lore and story up front and centre, and none of them tackled Indian culture. We found that to be a glaring omission. After all, India is one of the biggest markets, if not the biggest, for the battle royale genre yet audience representation is non-existent.

All of these factors led to us taking the first steps to making Indus 17 months ago.

What state is development in, and how many people worked on the game?

Development of the game is still ongoing. The team on Indus is currently 40 people strong.

One of the biggest challenges we had to overcome was crafting a brand new ballistics and weapons system. Granted, we could have borrowed and worked with what we did on MaskGun, but given Indus’ sci-fi setting and goals, it wouldn’t be the right fit.

MaskGun is squarely focussed for mobile audiences, usually casual, and has a modern day setting. On the other hand, Indus is for PC, console, and mobile with a sci-fi setting for an audience that's played battle royales prior. There's a different expectation.

Unlike our counterparts in the west that have ready and almost easy access to firearms in order to gauge how their in-game weapon systems should behave, guns in India, for our use case, aren't really easy to come by and are layered with an exceptional amount of red tape.

Granted ours is a game with a sci-fi setting which allows us some creative liberties, but audiences want something that they can feel and relate to with each press of the trigger in-game. Our solution was a mix of quality time spent at local firing ranges along with a lot of inspiration from every shooter we loved from Call of Duty to Valorant, and even the likes of Destiny 2.

The end result? Perhaps the most nuanced ballistics and weapons system we've crafted with thousands of parameters that affect each gun's functionality, behaviour and personality positively resulting in what we believe is an impactful and authentic experience of firing guns.

While this was our biggest challenge, it wasn't the only one and I’d like to speak a bit more about challenges to nuance this answer better.

Let me start by first also acknowledging that Indus is by far the biggest and most ambitious project we’ve undertaken with our background of making games for 12 years. Indus had a lot of moving parts with their own challenges.

Be it designing a sprawling map that lets players move around with ease or justifying the existence of a single asset in a structure like a ramp in a building. Indus is a game of scale and decisions – both big and small.

To overcome these challenges and especially compared to our past games, there’s been a lot more preplanning and pre-production before entering into development full-swing. That’s been a necessity given the scale and scope of what we’ve been working on, to the point where even minute details are decided in advance.

At the same time, we’re not hell-bent to go in one direction if it isn’t the best decision for the game, making flexibility important. It helps that the team on Indus understands this it eradicates another major challenge: building consensus. With that in mind, we’ve been focussed on getting the right talent on board to help us craft Indus to be the best it can be. Shameless plug: we’re hiring.

We are never quite really satisfied with any of our games as there’s always one thing or another that we have to drop or push back for a multitude of reasons. That said, we felt confident that we had something worth pursuing in Indus when we had our first playable build at our yearly company meet up on November 25 2021, the response from our colleagues who incidentally are also our biggest critics spurred us on.

Nonetheless, we’re still deep in development and while the response internally and externally has been great, we’ve miles to go before we’re done.

What makes Indus stand out from other battle royale games currently on the market?

Aside from our ballistics and weapons system, it would be our setting and focus on our theme of Indo-Futurism. We drew tons of inspiration from the "Black Panther" movie and how the IP was built around Afro-futurism and something that worked globally.

To us, this provided to our team a blank canvas where Indo-futurism is conceptualising a futuristic society and what it would look like when viewed through the lens of Indian civilisation and extract elements from Indian art and culture to create a fresh yet relatable futuristic world for players to immerse themselves in.

With the theme of Indo-futurism we want to look towards the future and create a unique and interesting world that others haven't seen before, which reflects our own identity and origin rather than being derivative of other games.

Without spoiling much, the premise of Indus isn’t even on earth. We’re inspired by space and the mysteries it holds. In fact, the entire premise of Indus is based on the singular question: what if the Indus Valley Civilisation never went extinct and what if it just moved to another galaxy altogether?

So how does this guide us? Well, it aids in being able to extract elements from Indian arts and culture and create a fictional world using them to convey the feeling of being Indian at the same time as being futuristic.

How does this reveal itself to the player? For instance Virlok – the island on which all the action in Indus takes place – is a mix of old and new as you can see from this early art exploration below that was done to capture the tone and vibe.

Another example of this is the Jatayu. It’s a symbol of valour across India and we found it to be a welcome representation of bravery amidst impossible odds. These are some explorations of what it could look like keeping indo-futurism in mind.

Also as a Mythwalker – your player character – you are not bound to a single form and you can expect to play in a form that resonates the most with you. One of these is Mor-Ni, a player skin inspired by stylings of that era along with a touch of sci-fi chic.

This isn’t all. Indus runs on Unity and utilises our fully custom-built sandbox shooter tech stack called the Indus Engine. For us, working with Unity, it’s significantly easier and faster to target mobile devices because of its feature set, toolchain, and relatively lighter runtime footprint compared to some other commercially available game engines. The team has extensive experience working with Unity over multiple shooter titles. We made a conscious choice of going with Unity so that we can leverage our expertise working with it and deliver the game in the hands of players as soon as possible.

That said, it works in concert with the Indus Engine which is a necessity for scalability, networking, and well, allowing us to bring the game to mobile with ease. Mobile is the biggest segment of the global gaming market and we want to treat players on mobile as first-class citizens rather than an after-thought.

The intention with Web3 isn't just to stop at one game

In addition to Indus, we have MaskGun and Silly Royale, both out on mobile. MaskGun is our online multiplayer shooter with over 60 million players and we recently launched a brand new 1v1 mode that’s been met with resounding approval from the community. Silly Royale is our take on the social game genre with dollops of pop culture with its customisable modes and skins. We have grown this to 17 millions players in the last nine months.

The intention with Web3 isn't just to stop at one game. It is to build the entire ecosystem with our engine platform, our social multiplayer games, and our web3 marketplace - essentially what a Web3 version of Epic Games would look like, crafted in India for the world.

We’re truly humbled by the response to our reveal and subsequent announcements in terms of what to expect from the game from both the press and fans in India and around the world. It’s not something we expected or planned for. The Indus team is heads down and working to get the game out so that we can live up to your expectations and our own of building Indus – the most ambitious game built in India.