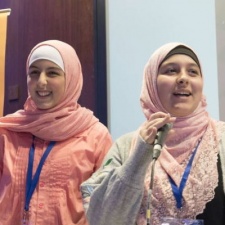 As part of last month’s annual PocketGamer Mobile Games Awards - supported by Game Insight – the awards committee had the privilege of selecting a recipient for this year’s Rising Star award. It went to two very special developers from the MENA region.

This special award category recognises a company, group or individual that has just started making their mark on the games industry, with loads of potential to grow. This award was first issued last year, when it went to Simay Dinc of ReContact Games, meaning that Sakura Games is only the second outfit to hoist the trophy.

Sakura Games is the work of Sham and Jana Al Bdour, two young Jordanian sisters who first crossed our radar during PocketGamer.biz’s work in Amman. While still teenagers, the pair delivered outstanding pitches at the Big Indie Pitch competitions held in Jordan. They speak multiple languages, have developed several educational games for their community and have spoken about their philosophy and inspiration at international games conferences.

As a result of the pandemic, however, we were unable to greet them in person on July 20th, but the pair sent us an acceptance speech by video and were present via Zoom to see their category called by host Chris James on stage. After the ceremony, we interviewed the pair, to hear more about their work and plans for the future.

The idea of Sakura Games came from our belief that there’s a lack of interactivity and rigidity in the educational curriculum...

PocketGamer.biz: How did you get started developing games?

Sham and Jana: Ever since early childhood, our father encouraged us to always try new things in order to find out our goals and passion in life.

After a long journey, we settled in the field of game development, design and 3D art. Being the optimistic and life-loving students we are that also want to change the world, we started creating 'edutainment' games, to achieve one of the most important goals of sustainable development goals, Quality Education. That developed into our current startup company, Sakura Games, which we founded in 2017.

How would you summarise your philosophy – what is Sakura Games’ mission and purpose?

The idea of Sakura Games came from our belief that there’s a lack of interactivity and rigidity in the educational curriculum, which does not help children achieve their life goals and dreams.

What project are you most proud of so far?

We have more than one project - starting with Crimson, which is an 'edutainment' game for kids aged between two to five years old. It teaches them about letters, colours, shapes and numbers.

A lady once told us how good her daughter is at these subjects and that other mothers keep asking her how she taught them to her daughter so well. It was due to her daughter playing the game! Car Girls Garage is a game that we are proud of too.

Do your parents and teachers take an interest in your games development work?

Our Dad was always our biggest supporter. He was the one who started us working in game development in the first place. We sometimes get disappointed and worry that our games are bad, yet our father always motivates us and sees our games as his kids too.

What makes Jordan an interesting place to develop games? Is it a good place to thrive as an independent game developer?

The launch country doesn’t help or slow down the process. The positive is that because our work is done online, we can work with anyone anywhere in the world.

We see this as one of the important milestones in Sakura’s journey...

What advice would you give to other young developers who are just starting out?

Start early and try out as many things as you can, so that they can figure out what they want to focus on. It's crucial to know that game design and planning are as important as programming and art.

What are you working on right now?

Bio Adventure is a series of games, tools and simulation apps covering biology concepts. It integrates gaming principles and scientific information to make learning more fun. It provides a challenge and a motive for the students to learn and helps them learn more effectively and improves their overall experience.

It's a simulation game about cell mechanisms and biology interactions, as well as a modern concept developed accurately with students' needs in mind. We have developed a big part of this game but still aim to improve upon it.

Where do you see Sakura Games in 10 years’ time?

Somewhere great. We wish to be able to fully achieve the fourth sustainable development goal: quality education. We aim to continue our studies in the fields of advanced programming and game design. On top of this, we hope to collaborate with big companies such as Epic Games, Electronic Arts and Disney.

Who are your heroes in the games industry – which companies or developers inspire you?

Ustwo is one of the great companies we look up to. We like their style of art and the stories behind its games.

What does winning this Rising Star award mean to you?

It means a lot, and we see this as one of the important milestones in Sakura’s journey. The Rising Star award means that our work has been appreciated – and this is not something new from Steel Media as the company has always stood by our side and supported us since day one.

Congratulations again to Sham and Jana AlBdour of Sakura Games, the recipients of the Rising Star award at the official Mobile Games Awards 2021.

See the full list of winners online at the official site and read our coverage of the ceremony from last week here on PocketGamer.biz. The next Mobile Games Awards will be held in January 2022 in London.

Sakura Games' Jana and Sham Al Bdour on challenges in the Middle East, and future-proofing the industry for female developers