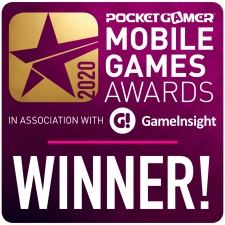 Extravagant disco-soundtracked decor and topless trapeze artists (male) may feature strongly in the photos but they were by no means the highlights of a fabulous Pocket Gamer Mobile Games Awards 2020 in association with Game Insight, which saw 22 category winners being named as the best in their respective field for their output over the past year.

Some 250 guests comprising a mix of finalists and fine industry folk gathered on the evening of January 21st – right after Pocket Gamer Connects London closed its doors – for an exclusive gala dinner event held at the delightfully decadent Café de Paris.

Over a three-course meal, guests witnessed a 'best of the best' showcase of the last 12 months’ games industry activity that included thatgamecompany's Sky: Children of the Light and Activision's Call of Duty: Mobile walking away as the recipients of 'game of the year' awards, with CoD: Mobile developer TiMi Studios further celebrated as winner of the 'Best Developer' category.

Indie developer Starberry Games and publisher Scopely also found themselves singled out from their peers, while Recontact Games's Simay Dinç was awarded the inaugural 'Rising Star' category and Zynga's President of Publishing Bernard Kim picked up the 'Mobile Legend' gong as recognition of his long and significant contribution to the industry.

Elsewhere, gongs for essential services including everything from Analytics, UA and Live Ops to Recruitment, Localisation and Marketing were picked up by Unity, AppOnboard, App Annie, ChillConnect, Apple Arcade, Facebook, Small Giant Games, Aardvark Swift, Universally Speaking and Superscale – see the full list below and more information on the official site [link].

Steel Media CEO Chris James, who hosted the evening’s ceremonies, was understandably upbeat. “I’m incredibly proud of this evening’s Awards and of course the preceding Pocket Gamer Connects London conference – both were the biggest of their kind to date and reflect the performance and outlook of the industry right now.

“The mobile games business has never been bigger nor the future brighter – there’s so much amazing talent creating so many awesome games and services right now, and it is an absolute privilege to play some part and be able to shine a light on the excellence. Crucially, despite the vast scale, it remains a friendly open community, too, and we intend to be part of it for a long time to come – I’m lucky enough to have an amazing team around me and even after nearly 15 years we’re still excited and feel like we’re really just getting started!”

We'll leave you with the full rundown of winners, with our huge congratulations to each and every one of them!

And the winners are…

You can check out the prettier version of the above list at the official PG Mobile Games Awards site.