From Disney to EA to Zynga, Kim's impact on the mobile space is impossible to ignore 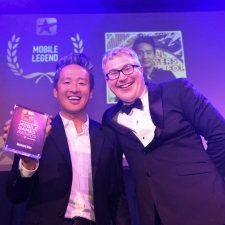 If it's true that good fortune comes in threes, then Zynga President Bernard Kim (pictured here with Steel Media CEO, Chris James) must have at least one more media citation in his near future. Having picked up the PG.biz Top 50 top developer award during Gamescom last August on behalf of Zynga, this week he was honoured as a Mobile Legend for his own career at the third annual Pocket Gamer Mobile Games Awards in London (following on from the PG Connects London conference).

"I think that means I'm either too old or need to retire," offered Kim to the 250-strong exclusive gala dinner crowd representing the very best of the entire mobile ecosystem within the opulence of London’s Café de Paris.

The previous years' recipients, uber entrepreneur Kristan Segerstrale and King’s Games Guru turned Resolution Games XR pioneer, Tommy Palm, set the tone for this award as a celebration of individuals boasting not only great achievements, but also a genuine passion for games and engagement in the games industry – all traits to which Bernard Kim can also lay claim, though he is, graciously, quick to share the accomplishments with the industry as a whole.

"We've all been pioneers because we're bringing gaming to as many people as possible," he suggests.

Having started his mobile career at Disney Mobile before departing to EA Mobile in 2006 (the same year, coincidentally, Steel Media launched Pocket Gamer), he was one of those who, in his own words, 'bet early' on mobile.

"I joined EA with a dream of bringing games to devices that were not meant for gaming," he recalls. "It's been an incredible journey."

Over ten years at Electronic Arts, during which he rose to the position of Senior Vice President, he helped the company transition from early success on JAVA/Brew downloads through the arrival of smartphones and app stores, all the way to the vibrant c.$70 billion business dominated by live free to play games we know today.

He managed some of the biggest gaming franchises in the business, including Tetris, The Simpsons: Tapped Out, Plants vs. Zombies, Real Racing, Bejeweled, Star Wars, Minions, SimCity, EA SPORTS, and The Sims, as well as EA's Chillingo publishing operation and Publishing in Asia.

In 2016 he joined Zynga as president and, alongside CEO Frank Gibeau and a crack team, helped lead the company's turnaround, transitioning from sleeping giant to a period of rapid growth and a current position where Zynga’s market cap has virtually tripled and is among the fastest growing public gaming companies in the world.

Once again he worked with leading brands and franchises, currently presiding over a portfolio that includes CSR Racing, Words With Friends, Zynga Poker, Empires & Puzzles, Merge Dragons!, Merge Magic!, and partnerships with some of the world's most iconic brands and entertainment franchises, such as Game of Thrones, Harry Potter, and Star Wars.

Leading from the front

Kim is a very active president, overseeing virtually every aspect of how the company brings its games and services to players – from global marketing, user acquisition, ad monetization, revenue, and communications, to consumer insights, product management, business development, and strategic partnerships.

He manages teams in six countries and across four states in the US, and oversees Zynga's efforts around mergers and acquisitions, leading the acquisitions of Peak Games, Gram Games (developer of Merge Dragons), and Small Giant Games (Empires & Puzzles).

As was also revealed in the affectionate introduction at the PG Mobile Games Awards ceremony, he retains an incredible passion for games and the industry. "My one superpower is I have the ability to play three hours of video games every single day, and I've done that for 30-plus years," he says. "Even on my honeymoon I did not miss my gaming sessions."

This is all the more impressive considering not only the extensive travel schedule dictated by his responsibilities above, but also his intense selfie habit and an exemplary commitment to both his family and also their annual social Christmas card tradition – which followers of his social media output will know are a work of art in themselves.

All in all, Bernard Kim is a credit to the industry and a very worthy recipient of the Mobile Legend Award – awarded, we assure him, without the slightest suggestion that he should consider retirement. Not that he appears to be, predictably.

"As for the future, I have no idea. The space can change so quickly – it's disruptive, it's dynamic. But one thing I can say is we're now building games for the ultimate gaming device. It's on 24/7, with amazing screens, and incredible processors.

"It's really an incredible space to be in."