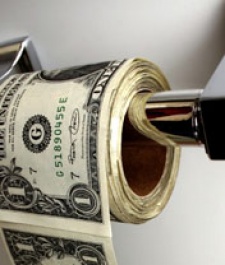 Freemium games are one way of making money - one strategy for getting people to pay for a game. Instead of paying an upfront price like a premium title, you're given a game for free and provided opportunities to purchase optional items and currencies within the game.

This is what draws revenue for the developer: small purchases from a huge number of gamers.

It's an appealing concept, though the financial situations of the biggest purveyors of the freemium idea clearly show challenges in making the formula work. While some companies soar with hit games drawing thousands upon thousands of paying gamers, others falter due to a lack of interest in purchasing optional items or high production costs.

When ngmoco transitioned from a premium game publisher to vocal freemium proponent, the move was intended to boost the company's revenue. By offering freemium games that are supposedly more appealing to mobile gamers, ngmoco would make more money.

Interestingly, ngmoco was able to generate good revenue from its freemium games; however, the exorbitant cost of maintaining the persistent online networks behind each of its games wiped away increases in revenue. In other words, the enormous cost of building these games countered any financial gains.

Freemium titles are sophisticated products - even if the gameplay isn't - and the costs associated with building and then maintaining such games are distributed over a longer period of time than premium games. In the case of ngmoco, the costs were significantly higher, but not every company has this problem.

The unlikely success of Zombie Farm

Developer The Playforge has been enormously successful with freemium game Zombie Farm. Not only did it manage to beat ngmoco, Glu, and other big name freemium game makers in terms of revenue, but it was also the only freemium game to make Apple's top 10 grossing list for the year 2010.

Think about that: for all the attention placed on freemium gaming, only one freemium title was in the top 10 grossing list for last year.

While that's likely to change in 2011, it's clear that there's more hype than certainty surrounding the freemium financial craze. A good number of freemium games sit on the top 100 grossing chart on the App Store (about a third), yet the number of premium games is more than double - a ratio of 2:1. In other words, the vast majority of top grossing games are premium, not freemium.

Take it or leave it

One explanation states that freemium is still on the rise, so the share of revenue generated by freemium games will continue to displace that generated by premium title. That's probably true, but only to a certain extent.

It seems unlikely that the majority of revenue will come from freemium games when the most successful players in the market - EA Mobile/Chillingo, Gameloft, Rovio, etc. - are betting and winning with the premium model (with some infusion of in-app purchasing), not freemium.

While the chances of getting an enthusiastic gamer to spend hundreds on in-app purchases in a freemium game is real, it's also slight. The disposable nature of mobile content in which gamers play a game once and move on to the next big title makes a 59p/99c premium game a safer bet.

That isn't to say freemium doesn't have a place in mobile gaming or can't make money - it just isn't going to take over the industry and it's not an automatic cash machine.
In Freemium isn't the future, Part 3: learning the lessons of previous trends and recognising that freemium plays an important, but limited role in gaming.