Roman Backgammon, GoNinja, and LostWinds 2 are the highest-reviewed iPhone games of Q2 2012 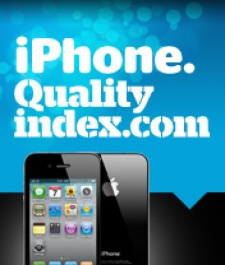 But, instead of assaulting your ears and eyes with talk of operating profit, the iPhone Quality Index quarterly round-up ranks the top 20 best-reviewed iPhone games that were released during the period April 1st - June 30th, 2012.

As for the reviews themselves, the iPhone Quality Index boasts over 200,000 of them from the world's leading online sources, including 148Apps, Slide To Play, Pocket Gamer, and AppSpy.

There are some games which stand the test of time. I mean, no amount of 3D tomfoolery or fancy-shmancy bloom effects can compete with the draw of a rock-solid, time-honoured mechanic.

Case in point: eoz games's Roman Backgammon. This mobile conversion of a classic game has found its way to the top of the iPhone Quality Index Q2 2012 chart.

Going back to the boardgame's ancient beginnings, Roman Backgammon presents you with a slightly tweaked, subtly simplified version of the well-known tabletop time-killer.

Its attractive mosaic visuals and intuitive interface have earned it critical acclaim. So much so, in fact, that the game has acquired a superb 9.4 Qi rating.

Your master has been killed, and - as is always the way with these things - you must avenge his passing by wiping out the clan responsible for his murder. Yep, all 50,000 of them.

It's a gruesome quest, but one that has resonated with iPhone reviewers across the planet, helping it to secure an extremely honourable 9.3 iPhone Qi rating.

A breath of fresh air

Floating gracefully onto the third-placed podium is the seasonally sensational platform-puzzler LostWinds 2.

In Frontier's wonderfully inventive title, you take control of the wind itself to blow protagonist Toku past enemies and over obstacles, thus bringing him ever closer to rescuing his mother and saving the world of Mistralis.

There are some novel control mechanics at work in this charming adventure, on which a number of critics have heaped praise over the past couple of months. A well-deserved 9.0 iPhone Qi rating, indeed. 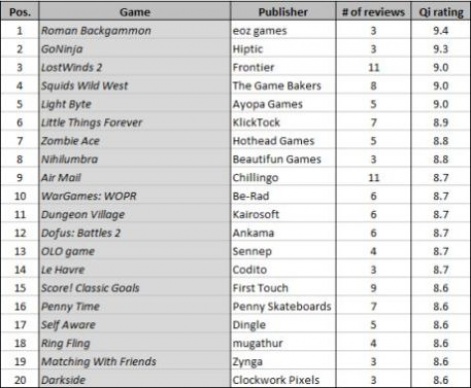 To qualify for an iPhone Quality Index rating, a game must have received three or more reviews from the 60+ sites that feed into iPhone Qi's database.

Should the number of reviews also be identical, the iPhone Quality Index rating comes back into play, for while we only display the average score to one decimal place, the list is generated to further significant figures.

You can always keep up to date with the hottest-reviewed iPhone games at the iPhone Quality Index.