Opinion: Amazon needs to focus on taking Kindle Fire and Appstore global, not getting into a specs-based knife fight with Apple

Know your place in the ecosystem 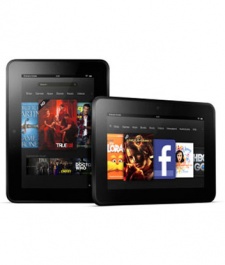 September 7th, 2012 - 01:32am
By Jon Jordan, Contributing Editor
As with every keynote since the passing of Steve 'One More Thing' Jobs, Amazon's Kindle Fire announcements were professional, passionate and slightly dull.

There was no smartphone. No smart TV.

The lack of any surprises doesn't reduce Amazon's growing significance within the digital ecosystem, however.

Its Kindle ereaders are now priced as low as $69, and are being blamed for everything from the decline of libraries and bookstores to the rise of racy literature decent people aren't embarrassed to read, just to be seen holding a physical copy of.

Soon, anyone who reads books - even semi-regularly - will have bought one, even if like me, some will find the experience eventually reigniting their love for the printed page.

When it comes to the everday interaction with digital content - games, apps, music, films etc - Amazon is in an similarly - if not equally - strong position.

As many commentators argued even before Kindle Fire was announced, the west's largest online retailer knows plenty about pricing, consumer engagement and recommendation.

Amazon is the only company that can rival Apple in terms of connecting people, their credit cards and retail fulfillment. Damn you 1-Click...

The difference is that Amazon is pre-eminent in the e-reader world, whereas in the tablet world, it's competing with Apple, Samsung and Asus, maybe even Motorola, Dell, Sony, HP, Nokia, Lenovo, Archos...

Hence it was surprising to hear CEO Jeff Bezos attempting to argue that while Amazon is a service company, the newly announced 8.9-inch versions of the Kindle Fire HD family provide the best tablet experience, bar none.

Even the official press release is headed "Amazon Takes on the High-End"...

Clearly that's not true. Even if you're paying significantly more for an iPad 3, it's the better device.

And even if a Kindle Fire HD 4G LTE was better, the update cycle from hardware companies such as Samsung, Motorola, Asus et al means that's Amazon's once a year announcements would only be leading the pack because of their specific timing.

It's a similar case when it comes to pricing.

The entrylevel Kindle Fire - twice the RAM, 40 percent better performance, better battery than the original - is now $159 or £129. It's certainly the best quality sub-$200 tablet you can get, even if the $199 Nexus 7 edges it in terms of sophistication (although not storage).

Don't forget, Amazon runs its own version of Android, so no, Kindle Fire doesn't have Jelly Bean and there's no Google Play. Amazon Appstore for Android is decent, but doesn't have anything like the same range of content; something that's key for early adopters.

Still, when it comes to the 8.9-inch Kindle Fire HD, few consumers are likely to be disappointed, whether they pay $299 for the wifi version or $499 for 4G LTE version (it's US-only - we're guessing due to the AT&T annual connectivity tariff).

"We're taking on the most popular price point for a tablet, $499, but doubling the storage and incredibly, adding ultra-fast 4G LTE wireless," commented Bezos.

"Kindle Fire HD is not only the most-advanced hardware, it's also a service. When combined with our enormous content ecosystem, unmatched cross-platform interoperability and standard-setting customer service, we hope people will agree that Kindle Fire HD is the best high-end tablet anywhere, at any price."

Jeff, I can tell you now that by the time the Kindle Fire HD is released in October (for 7-inch devices) and November (for 8.9-inch), they won't agree it's the most-advanced hardware.

The likes of Samsung, Sony, Asus, Motorola (even Google and Microsoft) are going to spend their time beating their heads against the wall marked 'Trying to beat Apple to the promise of being what you're calling "best high-end tablet anywhere, at any price".'

On occasions - Galaxy S III or Surface - they might gain a temporary victory, but any company whose strategic goal is to out-spend Apple in terms of supply chain-driven consumer electronics - a market leader with $100 billion in the bank - well, good luck.

Do what you do best

Amazon's goals need to be much more prosaic.

It needs to provide the best hardware at that price point; something it can easily do thanks to its ability to offset manufacturing costs with future business through Amazon.com.

It also needs to roll out its devices and Appstore globally; something it's been very weak at to-date.

No company is going to beat Apple in the North American market, at least until its economy tanks.

Better to stick to things everyone understands such as '8GB storage is dead', 'front-facing HD camera' and 'over 22 million movies, TV shows, songs, apps, games, books, audiobooks and magazines'.

Everyone understands these things - especially at $199 - and that's what the world which can't afford Apple products will pay $199 for.

Reply
Dave Mitchell Founder at Two Tails
Completely agree with you on this
Posted 9 years, 1 month ago