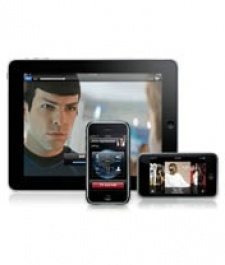 July 12th, 2011 - 11:40am
By Keith Andrew
One of the perceived differences between the mobile market and console is the flow of consumers in and out of different ecosystems.

While users are effectively tied to the console they purchase for 4 or 5 years, the nature of mobile contracts means consumers tend to switch handsets every 12, 18 or 24 months, creating an opportunity for one OS to eat into the share of another.

Not where iOS is concerned, however. According to a report by Deutsche Bank analyst Chris Whitmore, each iOS user spends an average of $100 on content for their device  a weighty investment that makes them reluctant to switch sides to back one of Apple's rivals.

"This averages to (about) $100 of content for each installed device; suggesting switching costs are relatively high (not to mention the time required to port)," Whitmore said in a note.

"While Apple's best in class user experience is combined with these growing switching costs, the resulting customer loyalty is unparalleled." 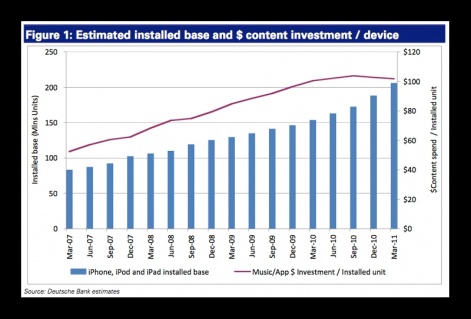 Even more encouraging for Apple  and, in turn, depressing for its competitors  is Whitmore's suggestion that this 'stickiness' will cement further as the platform's userbase continues to grow.

All in the OS

Whitmore, who recently predicted Apple will launch a budget and contract free iPhone 4S this September, believes Apple's iOS userbase will grow to 300 million by the end of 2012, with sales worth more than $30 billion.

In his view, these new consumers will be less and less likely to break away from the Apple fold thanks to the new features set to roll out on iPhone, iPod touch and iPad in iOS 5.

"In addition to new hardware, we expect the combination of an enormous iOS ecosystem, iCloud and a lower priced iPhone will extend AAPL's market reach and leadership with developers and customers alike, further enhancing the overall value of the iOS platform," he concluded.

iOS 5 is due to roll out this autumn.