September 28th, 2011 - 03:31pm
By Keith Andrew
Already partially unveiled by Engadget earlier in the day, Amazon has finally lifted the lid on its debut Android tablet, hosting an event in New York showcasing the device at the same time official details hit the press.

Indeed, Kindle Fire's first sanctioned splash came via Bloomberg, which published details about the 7-inch Android powered tablet before Amazon CEO Jeff Bezos had even taken to the stage in the Big Apple.

The tablet, which will come with no microphone or camera, is set to retail in the US for $199 from November 15, and is being pitched as a 'souped up version of existing Kindle devices' rather than a direct challenge to Apple's iPad.

Nonetheless, games will be a notable feature, with Amazon using Fruit Ninja to demonstrate its prowess. The tablet's first press shot (see below) also features an Angry Birds icon.

As well as its 7-inch IPS display - sporting a Gorilla Glass LCD screen - it will come equipped with a dual-core processor and will weigh in at 14.6 ounces.

It'll also have access to a host of Amazon services, including Prime Instant Video - which will host 11,000 movies and TV shows commercial-free for no extra cost - and Amazon Web Services.

No launch date or RRP was given for Kindle Fire in the UK.

It's already been suggested the tablet will run a modified version of Android prior to version 2.2, with hardware originally based on BlackBerry's PlayBook.

Kindle Fire wasn't the only device shown off at the press event, however.

Amazon also lifted the lid on additional Kindle handsets, most notably Kindle Touch and Kindle Touch 3G. Both devices sport a touchscreen but no keyboard, and will retail for $99 and $149 respectively.

A new entry-level Kindle, featuring buttons but no touchscreen or keyboard, will also roll out at $79 in the US, £89 in the UK. 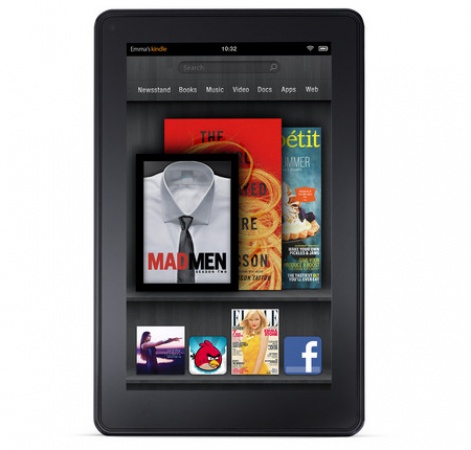