And Digital Chocolate is the frontrunner 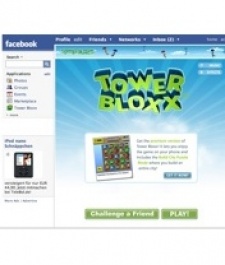 March 5th, 2008 - 02:21pm
By Fraser MacInnes
According to those that know, the mobile gaming market had a bit of an unexpected downturn last year. Developers and analysts roundly pointed the finger at telecoms operators' lack of investment in marketing mobile titles.

With the large-scale uptake of mobile access to social networking sites, however, telecoms operators have stumbled upon a potentially lucrative platform for promoting and delivering mobile games. At least, that's the story according to Reuters.

The movement is evidenced somewhat by serial trend setter, Digital Chocolate, which has already stationed Tower Bloxx on several social networking and gaming sites (and has followed this up with Cafe Solitaire). Since its first appearance on Facebook, Tower Bloxx has been installed more than 400,000 times in four months. The figures are certainly compelling.

Interestingly, with something like the iPhone the attitude towards web-based mobile games has been somewhat lukewarm, perhaps in light of the looming prospect of natively run games with the release of the unit's SDK (software development kit).

However, with publishers starting to realize the marketing benefits of supplying games in a strictly web-based environment rather than as downloads that are stored on your handset, perhaps more devices will be designed to channel this route as their primary feed to content. And, indeed, perhaps more publishers will seek this method of delivery.