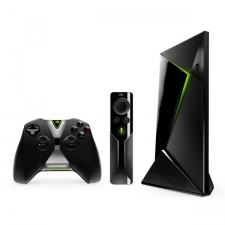 According to Nvidia, unconsoles such as Ouya, GameStick and Amazon Fire TV failed, not because of lack of audience interest, but because they weren't powerful enough.

Nvidia's response has been to ditch the 'un' and power up the 'console'.

At least, that's seems to be the underlying thinking behind the announcement that the Nvidia Shield Android TV box is now available in North America.

Coming in two flavours - the $199 16GB Shield and the $299 Shield Pro, which boast 500GB of storage and Borderlands: The Pre-Sequel - you'll get the console, a controller and HDMI cable as standard

Early adopters will also get $30 of Google Play store credit, along with a 90-day subscription ($30 value) to Google Play Music All Access.

In terms of the hardware underlying the Nvidia Shield Android TV, which is claimed to be "the most powerful smart TV platform ever built", it's Nvidia's Tegra X1, which packs a 256 core CPU, a 64-bit GPU and 3GB of RAM.

This enables it to offer 4K content, ultra HD streaming from Netflix, plus over 200 games, including a bunch - "almost 20" says Nvidia - exclusive ones.