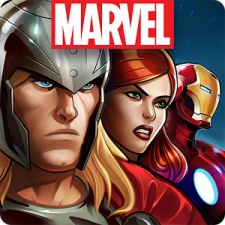 Within thirty minutes of starting to play Marvel: Avengers Alliance 2, you get a feeling something's odd.

It all looks fine - with cell shaded graphics and plenty of Critical and Devastating attacks.

And building on the success of the previous game, the 3v3 battler also offers plenty of depth and tactics, and an entire cast of Marvel superheroes.

But as you battle through wave after wave of thugs, goons and mad scientists, you start to feel the whole experience just feels a little slow.

This is down to the game's tactical nature.

Aside from the usual weak and strong attacks, each character has all manner of buffs and debuffs, plus there are character class advantages to take into consideration, and customisable abilities too.

So, even in the opening missions, battles become lengthy. Especially when facing off against bosses, you need to switch up your tactics and heroes on the fly to make sure you don't get annihilated.

Yet, once your heroes are suitably levelled up, and you've chosen the ability loadout you feel works best for you, the battle process can still feel tedious.

When buffing, for example, even if your hero can only buff themselves, you still need to tap them after choosing the ability.

Of course, there is a consistency issue here as some buffs can be applied to other characters, but given the slow pace of the game, it feels a bit unnecessary.

Similarly, when using an attack that hits all enemies, you actually need to tap on an enemy to trigger it.

Yes, these are a relatively small actions, but consider you'll be doing this constantly throughout battles, some of which have four waves of enemies and can last five or more minutes, and you'll realise the repetition quickly gets annoying.

Auto-play has started to appear in Western games, most notably EA's Star Wars: Galaxy of Heroes.

Of course, there is one solution which would streamline the whole experience – adding an auto-play option.

Can't someone else do it?

While it's a mechanic that's found popularity in the Chinese and Korean markets, auto-play has now started to appear in Western games, most notably EA's Star Wars: Galaxy of Heroes.

Galaxy of Heroes shares a few similarities with Avengers Alliance 2 – after all, they're both in the battler genre, underpinned by card collection mechanics, and they're both backed by huge Disney-owned IP.

And while it is true that Galaxy of Heroes lacks the depth of Avengers Alliance 2 – its heroes have fewer abilities and they can't be customised in the same way – the overall gameplay is essentially the same.

Because of this, both games offer the same kind of psychological reward and feeling of accomplishment, only Galaxy of Heroes offers it much faster and more regularly.

Detractors say that auto-play features remove an element of skill from a game, but in the battler genre it's typically deckbuilding that requires more skill than battling.

Surely, this genre is more about the meta-game than the gameplay?

Even in Avengers Alliance 2, once you've levelled your characters up high enough and perfected your team, you can take down opponents with class advantages over your heroes with ease.

At this point, the battles almost become a zero-player game. The outcome is pre-determined before you start the battle, so why bother going through the motions?

Having an auto-play mechanic, or even the option to sim battles (also used in Galaxy of Heroes), would negate this entire process, and allow players to focus on the ever-important meta.

Game within a game

Indeed, the really strange thing about Avengers Alliance 2 is not so much its gameplay as the developer-curated structure that stops it having an auto-play function.

For example, Galaxy of Heroes has the same set of Daily Tasks to complete every day, and you can work your way through them in around twenty minutes, including wait timers - see the video below.

Avengers Alliance 2 changes its Daily Tasks every day, meaning you have to check in and come up with a new strategy every day.

On top of this, its mission-specific tasks require you to do increasingly specific things, such as hitting a certain boss with a certain debuff a certain number of times.

Auto-playing through these encounters would negate what the developer is trying to get players to do - experience new elements of the game.

What can be done?

So with a changing meta and a deep, strategic battle system, it is clear why Disney didn't feel it wanted to - or even could - put an auto-play mechanic into Avengers Alliance 2.

Yet the result of this decision is that even in the early stage of play, the game's pacing is glacial, especially when compared to market leaders both in this genre (Galaxy of Heroes) and more generally (Clash Royale's 3 minutes sessions, for example).

Of course, this isn't to say Avengers Alliance 2 won't be a success.