8.7m Android phones versus 10.7m iPhones in the US reckons AdMob

Catching up fast in US but iPhone stronger globally

May 26th, 2010 - 01:17pm
By Keith Andrew
Given the US' position as the most lucrative market for consumer electronics, it's perhaps no surprise it's the dominant country in terms of iPhone and Android penetration.

Indeed, the numbers from AdMob's Mobile Metrics report for April  which analyses the data from the firm's 23,000 mobile website strong network  claim Android is running iPhone pretty close in the US, yet trails by some distance in Europe and other major territories.

Born in the USA

According to devices that have connected to AdMob's network, there are 8.7 million Android handsets in the US compared to 10.7 million iPhones.

But when iPod touch and iPad sales are taken into account  bouncing iPhone OS's total to 18.3 million  the ratio between the two is 2:1.

Worldwide that ratio stretches to 3.5:1, with 11.6 million Android handsets versus 27.4 million iPhones and 40.8 million iDevices in total. 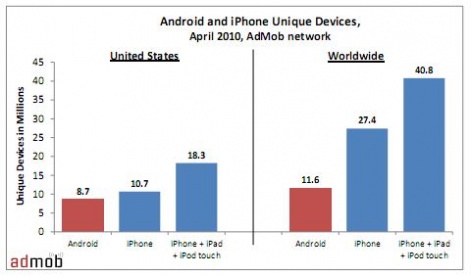 Such figures suggest Google has sold less than 3 million handsets in territories outside of the US, with North America accounting for 75 percent of Android's userbase. 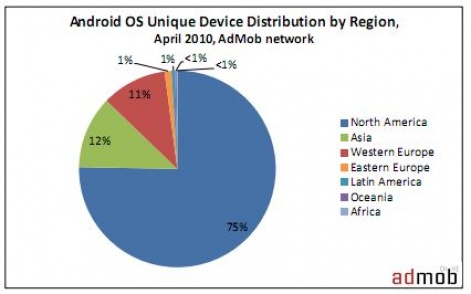 This makes sense considering that iPhone has been available for much longer than Android devices, as well as being better supported by operators.

"Although Android has a notable presence in the US, the iPhone platform has a much larger global reach," AdMob summarises in the report.

"Over the past 12 months, the iPhone platform has grown faster internationally than in North America. The iPhone OS experienced its strongest growth in the past year in Asia (474 percent), Oceania (367 percent) and Western Europe (269 percent)." 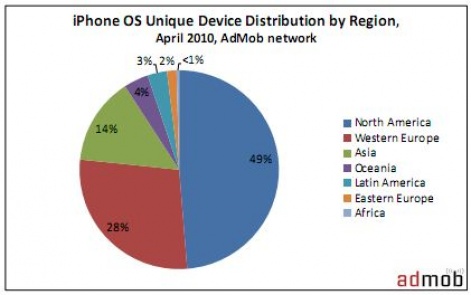 Admob's Mobile Metrics report for April can be read for free on the firm's website, along with all past reports.