July 4th, 2011 - 02:34pm
By Keith Andrew
For as long as the monthly reports detailing mobile market share have graced PocketGamer.biz's pages, there has been a disparity between the pictures painted in North America and Europe.

Broadly simplified, Apple long held the balance of power in the US, while most of the major territories in Europe were dominated by Nokia and its associated Symbian OS.

The latest report by ad network InMobi, however, suggests that, based on its ad impressions, the European market now has a distinctly North American feel about it, with Apple named as top manufacturer with a 19 percent share of the market.

And more generally, InMobi is seeing massive growth: up over 40 percent February to May 2011 and now receives over 35.7 billion mobile ad requests monthly.

Two peas in an iPod, iPhone and iPad

When it comes to geographic breakdown, Apple's position in North America remains far stronger, for instance, accounting for 25 percent of the market, well ahead of second placed RIM on 14 percent. 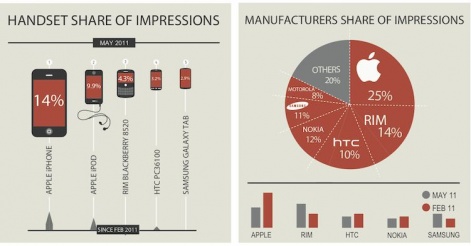 In Europe, Apple is just one percentage point of a two-way tie between Nokia and Samsung for second spot.

As you expect, both markets have iPhone as the singular handset generating the most impressions. 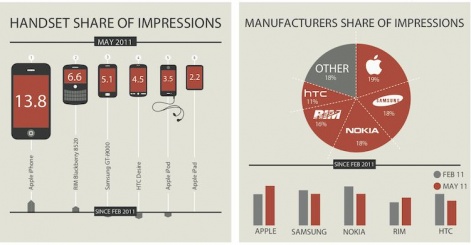 And both regions tell the same tale when it comes to OS share, with Android slipping ahead of iOS on 35.5 percent in North America to 26.9 percent in Europe.

Despite being named as the top manufacturer in both regions, however, Apple is not yet top dog on a global basis.

No doubt owing to the Finnish firm's continued strength in emerging markets, InMobi's impression analysis reports that 38 percent of the 35.7 billion impressions made globally every month come from Nokia handsets.

It's a share that's more than twice the size of second placed Samsung on 16 percent and almost three times as large as Apple on 14 percent.

Apple's iPhone is the world's most common phone, InMobi reports, but much of the firm's strength of late actually comes from sales of iPad, where users are more likely to encounter ads.

"Globally and in North America, both the Samsung Galaxy Tab and the Apple iPad break into the top 15 devices by ad requests on our network," states InMobi's Surag Patel.

"In Europe alone, the Apple iPad represents over 81 million ads in May 2011. It's evident that the hype around tablets is real and evident across our global network."