March 22nd, 2012 - 07:47am
By Tom Worthington
China has overtaken the United States as the leading country in iOS and Android device adoption, according to research from Flurry.

The analytics company has charted China's meteoric rise from being ranked 10th in application sessions over a year ago to finishing 2011 as the second largest app economy.

"China leads the world in app session growth, with an enormous growth rate of more than 1100 percent between Q1 2011 and Q1 2012," wrote Flurrys VP of marketing Peter Farago. 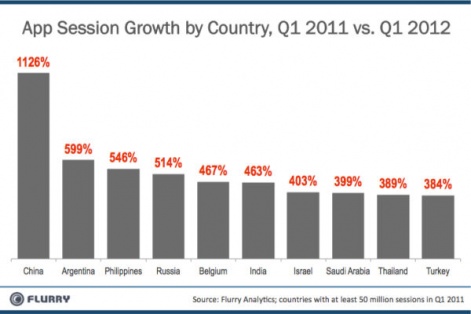 "China's growth rate is particularly staggering given that it was already the world's 7th largest country in terms of app sessions by the end of Q1 2011." 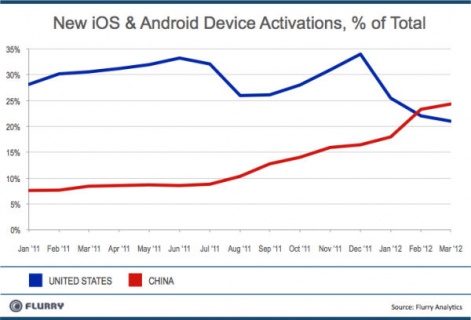 In January 2011, the US accounted for 28 percent of the world's total iOS and Android device activations, while China accounted for 8 percent.

In February, Flurry calculated that China surpassed the United States in monthly new iOS and Android device activations for the first time. 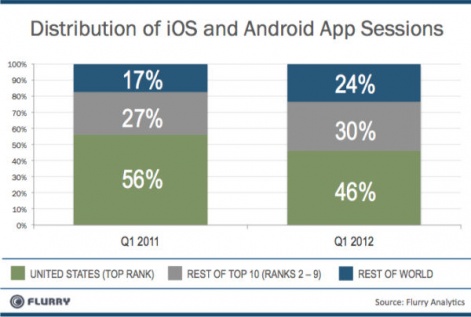 Hence, while the absolute number of sessions in the US has more than doubled between Q1 2011 and Q1 2012, its share of total sessions has declined from 56 percent to 46 percent.

"In other words, while the US app market is growing rapidly, the rest of the world is growing even faster," concludes Farago.