April 25th, 2013 - 01:30pm
By James Nouch, Staff Writer
Earlier this month, Amazon announced that it would expand the availability of its Appstore to almost 200 additional countries worldwide.

Right now, the Amazon Appstore is only available in seven countries, so the rollout will provide developers with a massive new audience for their games.

It's also caught the attention of analytics specialists Distimo and App Annie  the former has announced that it plans to add AppIQ support for the Amazon Appstore, while App Annie now offers full store stats and analytics for Amazon's platform.

Both firms have also used the announcement as an excuse to dig into their data and offer some insight into the state of the Amazon Appstore today.

Distimo notes that the download numbers for free apps remain significantly higher on the Google Play store than the Amazon Appstore, much as you'd expect.

Roughly speaking, Distimo estimates that Google Play is ten times bigger than the Amazon Appstore in terms of download volumes.

Not every app conforms to this pattern, however. Halfbrick's Fruit Ninja, for instance, was generated 9.1 times as many downloads on Google Play than on the Amazon Appstore in March 2012.
Jetpack Joyride, however, was only downloaded by 3.8 times as many people on Google Play  not bad, considering that Google Play is available in 132 countries while Amazon's platform is currently open to just seven. 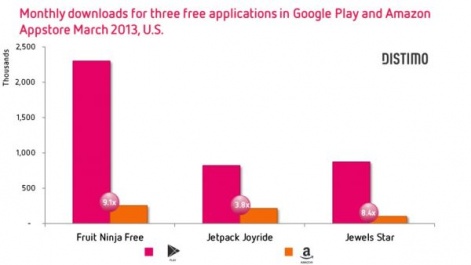 For most, it would seem that ease of porting between Android and Amazon is the primary reason to bring an app to the platform. 51 percent of Amazon Appstore developers cited this factor when asked why they publish on the retail giant's store.

Interestingly, 56 percent of the Amazon Appstore developers in App Annie's survey focus on games, and 50 percent cite games as their primary revenue driver on the Appstore.

This chimes with Distimo's findings. Eight of the ten most popular free apps on the Amazon Appstore in March were games. The only two exceptions to this rule were Facebook and Netflix.