But instead of assaulting your ears and eyes with talk of operating profit, DAUs, and monetisation (brrrr), this here Quality Index quarterly round-up ranks the top 20 best-reviewed iOS and Android games that were released during the period January 1st - March 31st, 2013.

As for the reviews themselves, the iPhone, iPad, and Android Quality Indexes boast over 650,000 (in total) of them from the world's leading online sources, including 148Apps, Slide To Play, Pocket Gamer, and AppSpy.

The first quarter of 2013 has borne witness to some bona fide iPhone gaming classics, which we'll still be referencing this time next year... and quite possibly the year after that.

Yep, they're that good.

Topping the Q1 2013 iPhone Quality Index chart, then, is Ridiculous Fishing, which should really be called 'Ridiculously Good Fishing Game'. Actually, no, it shouldn't. That would have been rubbish. But it's pretty descriptive, nonetheless.

Indeed, this past quarter has been awash with high-quality over-the-top interpretations of solo sports.

Down at #10, you see, is Noodlecake Studios's Super Stickman Golf 2, a round of which feels a bit like playing crazy golf in a blancmange factory while on acid. Only without the potential for psyche-scarring side effects. We think / hope.

We have a sneaky suspicion that Q1 2013 will also be remembered for years to come as the 'Quarter of Expert iOS Conversions'. Possibly.
Ridiculous Fishing - which we've already mentioned, Leonard Shelby - actually started life as a Flash game called Radical Fishing. Rather brilliantly for all concerned, though, the iPhone adaptation is considerably superior.

Joe Danger, at #3, is another gaming property that's been radically (and successfully) overhauled for Apple's mobile platforms. Can you see a pattern emerging? Yep, good.

Bolt from the blue

This 'bolt-on' technique was employed most effectively, perhaps, by the maker of Nimble Quest, who has combined old skool action-RPG adventuring with the unmistakable gameplay of classic feature phone game Snake. 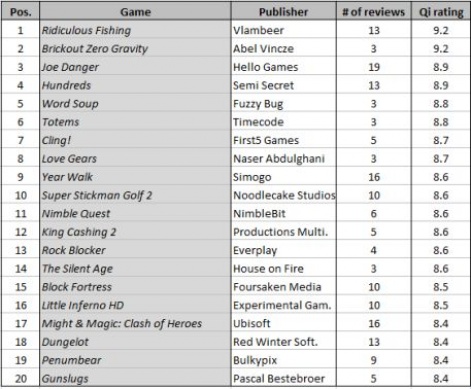 Like NimbleBit's 11th-placed gem, Red Winter Software's dungeon-crawler Dungelot has more than a whiff of antiquity about it. On this occasion, mind, office favourite Minesweeper underpins the action, as you tap to uncover more of each baddie-strewn level.

In Q1 2013, we also spied some highly original takes on the spatial puzzler sub-genre, which paid off particularly sweetly for iPad game makers.

At #3 on our rundown of the top-rated iPad games of the last quarter, for example, comes Semi Secret Software's Hundreds, which possesses an achingly cool art style and novel timing-based gameplay that feels perfectly suited to the iPad's multi-touch-friendly screen.

Down in seventh place, meanwhile, is Cling!, in which you must get a glob of goo to each level exit using numerous pegs and an irresistible sense of momentum.

Besides Hundreds, there were a number of iPad games that emerged over the past three months absolutely tailor-made for the iPad's large screen.

Fetch, for instance, is a gentle point-and-click adventure game that really comes to life on the bigger device, while Block Fortress is an altogether more complex action strategy game involving building your own defensive fort from scratch.

Little Inferno HD - from Experimental Gameplay Group - is yet another example of a mobile game that was born to be played on iPad. 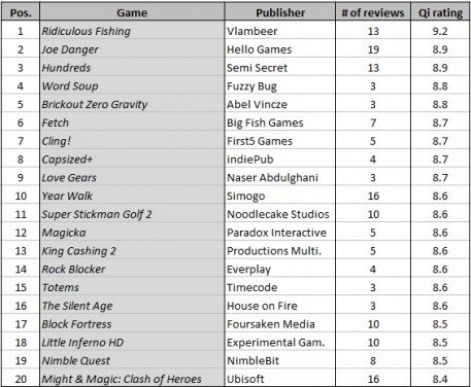 In this beautiful physics sandbox game, you are encouraged to burn stuff as creatively as possible, accumulating points for clever combustible combinations. It's one of the most disturbingly pretty games of the year so far.

While Neuroshima Hex tops the Android Qi games leaderboard for Q1 2013 with its somewhat dry strategy boardgame stylings, the overall 'droid tone for the quarter is considerably lighter.

There's a trend for twisted twin-stick shooters, for one thing.

In Towelfight 2, for example, Butterscotch Shenanigans takes the twin-stick format and lays it over a free-roaming action-RPG. It's completely bonkers.
Beat Hazard Ultra, meanwhile, looks every inch a standard twin-stick shooter, but it actually plays out to the tune of your own music.

High-class Android word games also rose to prominence over the past quarter, with three of the blighters making their way into our top 20.

The brains behind Word to Word - Fun Association, Spelltower, and Wordsplosion all provided their own distinct takes on this particular puzzle sub-genre. 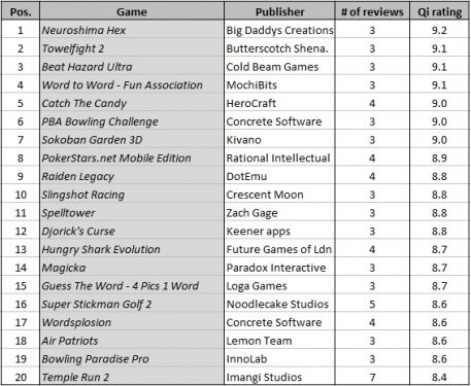 That was a bowling pun, by the way. Just checking.

To qualify for a Quality Index rating, a game must have received three or more reviews from the 65+ sites that feed into the Quality Index's databases.

Should the number of reviews also be identical, the Quality Index rating comes back into play. For while we only display the average score to one decimal place, the list is generated to further significant figures.