A tale of time and space: The making of Rymdkapsel 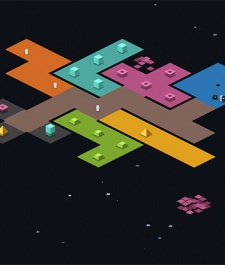 August 14th, 2013 - 01:00pm
By Kirk Mckeand, Contributing Writer
Having started life on PS Vita  the result of an offer from Sony - Rymdkapsel has more recently whipped up something of a storm on iOS and Android, benefiting from a rush of positive reviews praising its take on the strategy genre.

Acting as something of an ode to minimalism, Rymdkapsel is the product of developer Martin Jonasson.

It's an utterly unique and equally addictive real-time strategy game, and  aside from outsourcing its music and sound  Jonasson designed and built every element.

In our latest 'making of', we catch up with Jonasson to find out how Rymdkapsel seemingly came from nowhere to be the latest darling of the indie scene, and how the game evolved during its year and a half in development.

A few months of that year and a half, Jonasson says, were spent porting the game to its initial home, Sony's handheld.

"The game is programmed in a language called Haxe," says Jonasson. "It's quite similar to ActionScript 3, which has been my language of choice for years, but it lets me target iOS, Android and even desktop platforms using a single code base, which is nice."

Long before Rymdkapsel, however, Jonasson's passion for games development was sparked when he was just a boy.

"I got started making games twenty or so years ago, when I was around ten years old, noodling around with Klik & Play," Jonasson explains.

"I've always been fascinated with making computers do my bidding. So programming especially fascinated me. But also everything else you can make a computer do.

"I quit my job as a web developer just over three years ago to go indie, and I've gradually transitioned over to making games full-time. Rymdkapsel is my first full-time game."

In the beginning, Jonasson worked mostly on creating Flash games, with his most well known being his minimalist, one-button dungeon crawler, Glorg.

Jonasson also collaborated with Finnish developer Petri Purho on a few projects - the most successful of these being Jesus vs Dinosaurs: a surreal physics-based builder with religious undertones.

One character plays as Charles Darwin, while the other takes on the role of God, with the aim being to make cars out of dinosaur and Jesus parts respectively  not exactly the kind of concept that gets made every day.

Lost in space
Rymdkapsel may not involve dinosaurs or deities, but it undoubtedly shares the minimalist approach to visual design set in motion by Jonasson's previous work.

The genre it sits in, however, was more of a happy accident.

"It just happened, really," says Jonasson. "I started working on the game right after GDC last year, mostly as a break from another project that was getting a bit tedious.

"So I figured I'd take a week to knock out a prototype of a space station game I had been thinking about. The entire idea there was this tiny little concept of the station getting a hull breach, losing pressure and your little space-station-dudes would get blasted into space.

"I had no idea how it would work save for that little detail. So I got started by coding up a little station-assembly thing, and I put Tetris-style blocks in there because I knew how nice they are for building things and it just went from there really. The hull breach never even made it into the game." 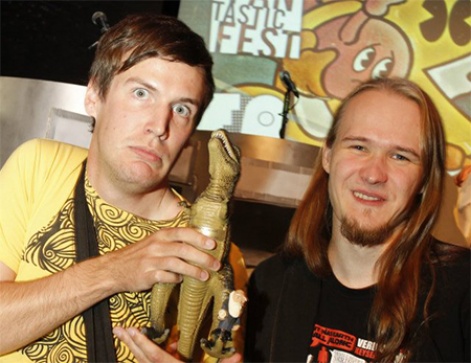 Jonasson took some inspiration from his own experiences with the genre as a consumer - childhood memories of Command & Conquer, building bases and not caring as much for the battles themselves.

"I didn't particularly like attacking the enemy," Jonasson remembers.

"Building the base was always the best bit for me. So I'd play multiplayer matches against really stupid AI and just block them off in a corner of the map and then build a completely ridiculous base.

"Or just cheat so i had tons of money and go nuts with the building."

The big switch
Rymdkapsel then, is a bit of a compromise between combat and building.

Although players are given much more freedom than in the likes of Command & Conquer, they're still charged with defending against waves of enemies.

It starts off sedate enough, but after about 40 minutes the game becomes a relentless barrage as swarms of pink arrows fill the screen.

"I had this room building thing down pretty early on, probably after a few days," Jonasson explains, "but in the beginning you could just plop rooms down at no cost, so I decided that having the rooms take a while to construct would be a good idea.

"So, in came resources. At first, I think I had just three different entirely abstract resources and the rooms would slowly build and cost a little bit of each resource, but that didn't look as interesting as I wanted it to - so, in came minions."

The minions - little white rectangles that build and defend a player's station  were originally intended to be placeholders, but Jonasson decided they had enough charm to stay as they were. "They've been the same white little boxes since the day I added them," Jonasson adds.

This is where the idea to introduce conflict was first formed.

"When [I introduced] minions it just made sense to have something come and try to take them away from you," he adds.

"I didn't have a plan at all for the game when I started out, so it was all very iterative. It's one of the luxuries you can afford when you're a single developer."

Indeed, Jonasson's journey between working on a base management title to one focused on the art of defence can be tracked within play itself, as the nature of Rymdkapsel the further players progress.

The longer the game goes on, the faster and more aggressive the enemies attack.

Jonasson admits that, once the player hits the 45 minute mark, there is a noticable shift from base building to all out defence, but his reasons for the switch are solid enough.

"It felt a good duration for a game," he explains. "You can do all the monoliths in that time if you know what you're doing, and it's not an unreasonable amount of time to have to spend either." 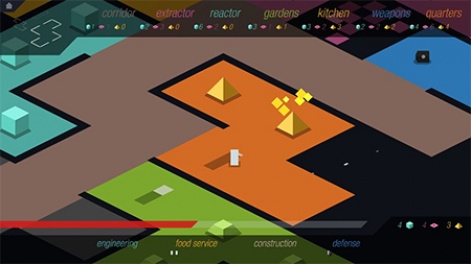 The monoliths sit in each of the four corners of the map, tempting the player to branch out and unlock their secrets - additional shield, speed, and generator upgrades.

"Design-wise, the game really came together when I added the monoliths," adds Jonasson. "They nailed that tradeoff between keeping your station nice and tight to be easily defendable and to expand widely to reach everything.

"The map is completely static. I get a surprising amount of requests to make the map randomised, but I'm hesitant to do it since it's tweaked by hand to be as nicely balanced as I can make it."

Dedicated players, however, may well have noticed an exploit during play that has the potential to impact on the balance of Rymdkapsel.

The game gives the player preset blocks with which to build rooms, cycling through them as they're placed. Yet, it's possible to cancel the construction at no cost once they have been placed, thus cycling to the next shape.

"I've thought a lot about that particular 'exploit'," admits Jonasson. "And in the end I decided that having the pieces be forced upon you would just not be fun, and that sort of forced my hand to open up that possibility.

"So, what happens is, if you cancel a piece it goes back into the build queue a few pieces back, so you can't avoid them completely".

And then, of course, the fact that players are building their base under pressure is another incentive to play the game it was meant to be played. Not that it means Jonasson hasn't been tempted to create a sandbox mode that, as a child, he would likely have been captivated by.

"A 'zen' mode has been on my wishlist for ages," he reveals. "And I still might add it actually, there's just a few technical issues I need to resolved.

"Plus, I've tried to make Rymdkapsel minimalist all the way through, so I cut anything I didn't feel was essential to the core of the game."

That approach to keep things stripped back meant plenty of other elements were also dropped in the recycle bin during Rymdkapsel's development. Jonasson wanted the design of the game to be consistent and without filler.

A less obvious design decision, however, was to make Rymdkapsel's AI (for want of a better word) friendly.

"The minions are a bit stupid on purpose," he says. "I could absolutely have made them smarter in the way they go about things. There's even a few things they do that is borderline buggy that I kept because I found it a bit adorable."

Jonasson is referring to the fact that minions working on construction have a habit of stealing food to help them build  food that, as a matter of priority, should really be used to spawn more minions. 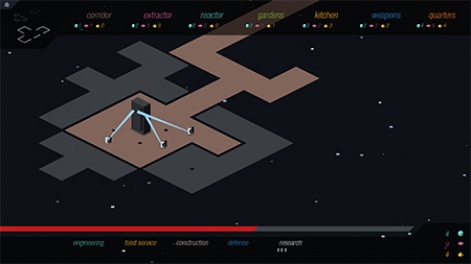 Other quirks  such as minions assigned the same task wasting time by heading towards the exact same material en masse - were less intentional, Jonasson admits.

"That can indeed get a bit annoying," accepts Jonasson.

"It was for sure one of the most tweaked parts of the game, having the minions stay 'adorably stupid' and trying to avoid people wanting to punch them and, I guess in some cases, they do stray a bit too far into punch-land."

Another element of play Jonasson admits has proved to be slightly problematic is the game's name. Rymdkapsel means 'space capsule' in Swedish. Wasn't Jonasson tempted to translate said moniker into English?

"Swedes don't care too much about things being localised," admits Jonasson.

"[However], I wanted a name that had a few properties: it had to be unique and I wanted it to sound vaguely foreign - maybe a bit like a russian space program thing. So, after much consideration, I decided that Rymdkapsel would be a cool name.

"I didn't, however, realise how impossible that word is to parse for English speakers. I just assumed people would go rimmed capsule', but the y' and k' seems to make them go I don't know how to say this' and not even try, which is unfortunate.

"The only real drawback is that spelling isn't immediately obvious, which isn't terrific for finding it on the app store. But I stand by the name." 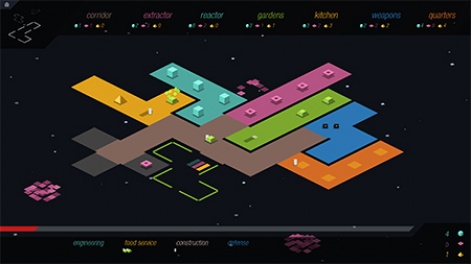 So, what's next? Jonasson admits he's not yet sure.

"I'm sort of torn there. In a way, I want to expand it a bit, but I also want to bring it to new platforms. And, perhaps most of all, I want to start something new," he says.

"And I can't do all three of those, so I'm not quite sure which it'll be."

Jonasson has another project in mind but, just as with Rymdkapsel, he's not yet willing to pin it down to a single concept.

"Judging from how much I knew what I was making last time... It's looking like it'll be a strategy-management type of thing again, but I honestly don't know!"