Sophie Brugmann: having diverse leadership teams can lead to incredible symbiosis at the top

The Head of Operations for Lessmore and editor Womenize! thinks we need more open communication in the workplace 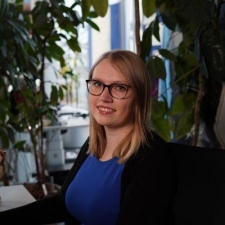 Here at PocketGamer.biz we celebrate diversity of all kinds. Speaking to various inspiring women at our Pocket Gamer Connects events around the world, and being aware that there is still a real need to shout about the subject, we decided to focus on females for December. In this series of features we will interview various women working in gaming, as well as sharing other stories around the subject.

Sophie Brugmann is the Head of Operations at Lessmore, an independent studio based remotely with staff all over Europe. She is also the Editor of Womenize! - Inspiring Stories and an ambassador for Women in Games, so she was an obvious candidate for our December focus on females in the industry.

PocketGamer.biz: Please tell us a little bit about yourself and your current role?

My name is Sophie and I’m Head of Operations at Lessmore, makers of Pocket Chess and Eatventure. Basically, anything ops-related falls under my realm of responsibilities. Whilst being accountable for all finance and legal matters, the role also includes remote office management and human resources. It’s a broad and challenging number of varying tasks and above all, prioritisation and focus are essential. Personally, I’ve been lucky to have navigated through adventurous start-up journeys in the past, from indie to triple A, across multiple platforms, and many countries.

What first attracted you to the gaming industry?

My family regularly played board games and my dad had a PC early on, which I’d then use to play black and white chess, on a floppy disk against the AI. Later he’d challenge me to a round of Space Cadet Pinball. In addition, friends in the neighbourhood met up to play video games together, too, and at some point, I’d join in myself.

It was much later, in university, when it became clear that video games could be “a real job”. There was a little advertisement by my very first employer in the industry, and it led me to understand that gaming is not only a hobby but also a professional career path. And since then, well, I’m stuck. It’s amazing!

What effect do you think the culture within which you grew up has had an influence on your career path?

Everyone has been very supportive in terms of education and job perspectives. In my personal environment, it was possible to explore different hobbies and interests without restrictions. Whether that meant signing up for law school or moving into an artistic direction, I’m glad I’ve had chances to be engaged in all these areas.

In Germany as a whole, we should be grateful that we have many opportunities that others do not have. And it’s worth taking the time to appreciate that. In addition, there are a lot of gaming events, such as Gamescom, which bring gaming closer to the broad public, as well as the professionals together. A friend once said it’s like an old classmate gathering.

What challenges have you had to face during your career - thinking specifically about being a female in the industry?

There have always been ups and downs. From people absolutely having your back, being supportive and interested in discussions, to others that said “a girl should really not attend this important meeting”, or who would instantly go defensive at the smallest sight of constructive criticism.

Generally, I’ve accepted there will always be people underestimating myself and the abilities I bring to the table. Whether that’s because of the blonde hair, being a female in the industry, or whatever else someone would come up with. But then, they might have other issues, like not being confident themselves and showing it by being negative towards others. Seeing and engaging in many networks and initiatives, such as the Femdevsmeetup or Womenize! - it makes me feel powerful and a part of a strong group. And I take that with me when working and in my private life. Knowing one is not alone facing challenges is great.

What advice would you give to companies looking to improve equality within the workplace?

It is important to look at the topic as a whole, as only hiring a few females in junior roles will not do the job. Having female, or generally diverse, leadership teams can lead to incredible discussions and symbiosis at the top of a company. I’ve seen amazing diversity initiatives come to life within companies, yet if management is not on board, the impact will always stay limited. So that’s one, diverse representation, contact points, people who can and want to change things.

This stretches to different areas, such as equal pay, maternity and paternity leave policies, and most of all equal rights to speak up and be heard. What can be done instantly? Checking the company structures, asking for feedback and thoughts from employees and taking them seriously.

And what advice would you give to other women joining the industry?

Trust in your abilities, make connections, speak up. No job is worth you not feeling valued. There are places who really do put in effort for equality, and strong women amongst them. Or, respectively, many amazing people, no matter their gender or backgrounds.

Who inspires you the most (not necessarily from within games)?

Team 17’s Debbie Bestwick has always been kind of a role model for me. Those who meet her probably do remember her happy spirit and colourful hair at the very least. She had given a talk many years ago at a conference, where she explained how she’d been working her way up within the company. And I thought, hey, when I’m a grown up, I’d like to be like her.

There’s a bunch of dear friends, like Linda (Rendel), who always provide great advice and new perspectives on topics. We do not only share the same birthday but also seem to like going for similar challenges. It’s great to find someone to talk to about our stories.

Since you entered the games industry, what is the biggest change you’ve seen and is this for better or worse?

Covid-19 has brought some major changes into the industry. Companies started offering work from home or hybrid solutions. Events moved into digital formats, Zoom and Discord groups got stomped out of the ground like there was no tomorrow. It was very interesting to see this transformation, and now, figuring out how we’d all deal with this new experience moving forward. For us at Lessmore, we took it to another level, and do not even have a physical office at all. We work from all around the world, fully digitalised.

For better or worse, it’s definitely different from before. We’re super flexible and know anything is possible remotely, as it would be in person. Everyone can live in the countries and cities they feel home in, without having to move. On the downside, there’s not much contact in person, and sometimes it’s just nice to speak to someone face to face. We counter this by meeting up regularly (and voluntarily) in different European cities.

If you could change one thing about the industry, what would it be and why?

We do not speak about failures enough. Anyone who has been to Finland knows that their gaming industry is very special due to the open exchange of knowledge and more specifically failures. From what I’ve seen, many people struggle with similar issues, like feeling insecure about their abilities, or not knowing what they’d like to do (or not like to do) in the future. It’s time we share our fears and failures more openly. It helps so much.

And with this, also, leadership. Leadership is often put aside as a “something any senior could do” but it’s really not a “side quest”. Leadership requires thought, thorough planning, and there’s value in being a vulnerable leader as well. In my opinion, empathic leadership doesn’t make one weak, quite the opposite, it makes us stronger to speak about our problems and failures.

If you could only keep 3 games on your phone for the rest of time, which would you choose?

Cheesy but true, I’d keep Eatventure on my phone (the Middle Ages farming and castle event was so cool, and I’m now addicted to our own game).

Another nice one is Idle Ant Colony by Bling Bling Games. You build up your own little ant kingdom in the game, and the art is quite funny, too.

And third would be the Alchemists app, it’s a supplement to the board game (same name) and super fun to play. Mixing potions is great!