The founding team consists of veterans from Ubisoft, WB Games, EA and more 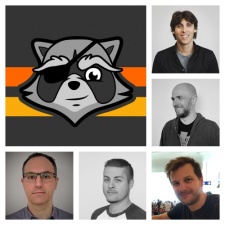 The founding team consists of Alex Hutchinson, Reid Schneider, Yannick Simard, Erick Bilodeau and Marc-Antoine Lussier. The co-founders have all held positions at industry-leading studios, such as Ubisoft, EA and WB Games.

Each member will reprise roles similar to their positions at Typhoon Studios. After launching in February 2017, the company was acquired by Google as part of its Stadia Games and Entertainment first-party development team, though this ended in the latter shutting down Typhoon in February 2021.

Raccoon Logic has been backed by a "large" initial investment, including backing from Chinese technology conglomerate Tencent. With the funding, the studio has regained the rights to Typhoon Studios’ IP Journey to the Savage Planet, a game the team previously developed.

Raccoon Logic’s debut project is still yet to be revealed with future announcements expected in the upcoming months.

Yannick Simard takes on the role of chief technical officer and previously worked at Ubisoft Montréal in different lead programmer and technical lead roles for both Watchdogs and its sequel, Watchdogs 2. Simard worked alongside Hutchinson at EA on Spore Hero.

Erick Bilodeau is the team’s designated art director and previously acted as a lead technical artist for WB Games Montréal on Arkham Origins, alongside Schneider. Bilodeau additionally worked on several other Ubisoft titles, such as Far Cry 2 and Shawn White Skateboarding.

Marc-Antoine Lussier is enlisted as the technical design director, having previously held the same role at Ubisoft Montréal whilst working on several instalments of the Assassin’s Creed series. Lussier also contributed to Syberia and Myst 4.

"Excited to be back"

"We’re excited to be back in the indie space, making the games we truly believe in with an amazing new team," said Raccoon Logic creative director Alex Hutchinson.

"The early investment from Tencent is a huge boost, meaning we can do significant work on our own before we start talking to publishers. We love systemic games, games with a sense of humour and a big heart, and games with strong flavours that get reactions from players. We’re going to keep pushing on those ideas and we’ll have something to show soon!"

Raccoon Logic studio head Reid Schneider added: "We’re super excited to continue the work we started at Typhoon Studios and build upon the Journey to the Savage Planet franchise in the future.

We previously wrote about the good, the bad and the ugly of Google Stadia's first 12 months.