94 per cent of those revenues came from mobile games, while 6 per cent came from console.

Europe accounted for 35 per cent of Gameloft's Q1 sales, with North America taking 37 per cent, and the rest of the world accounting for 29 per cent.

The publisher is enjoying something of a boom in North America, seeing sales rise 57 per cent there year-on-year.

However, that means revenues have actually fallen slightly in Europe during the same period, as the following graph (tracking revenues in millions of Euros) shows: 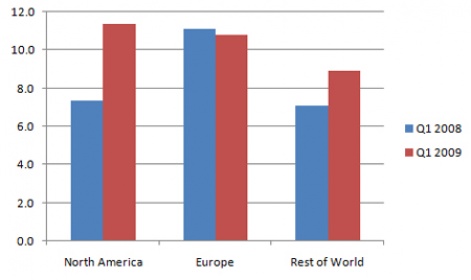 The publisher says it continues to gain substantial market share across all platforms, and expects to grow its revenues and improve its profitability throughout 2009.

In separate news, Gameloft has signed a licensing deal with Warner Bros to make a mobile game based on the upcoming Sherlock Holmes movie, due to be released at Christmas.

The announcement doesn't specify whether the deal includes iPhone as well as other mobile platforms.