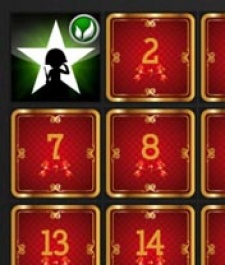 December 1st, 2009 - 08:41pm
By Jon Jordan, Contributing Editor
Considering the failure of most of the price cutting experiments during the Thanksgiving and Black Friday week, the news developers are embarking on Christmas sales might be viewed as the equivalent of turkeys voting for additional poultry-based feasts.

At least, the Appvent Calendar has a decent concept behind it.

Organised by Blacksmith Games, the idea is that - as with an advent calendar - one iPhone game will drop its price, going free, each day until Christmas.

Of course, you can download each game direct from the App Store, but the daily announcement will be made on the Appvent Calendar website.

First up to see if the momentary jump in downloads will translate into additional future paid sales was Craneball Studios with its line drawing game 33rd Division.

It certainly gained attention of punters with the title immediately entering the US free chart (albeit at #84 at time of writing).

As for one of the publisher which did manage to get the Black Friday sale frenzy to work (alongside Gameloft), EA Mobile has announced it will be dropping the price of 25 games by up to 80 percent between now and December 22nd.

Each daily special offer will be announced via twitter. First up was Trivial Pursuit: reduced from $2.99 to $1.99.