MeeGo v1.0 available for netbooks, with mobile dev to kick off in June

SDK, APIs and other OS tools available for download

May 26th, 2010 - 08:51pm
By Keith Andrew
MeeGo has announced version 1.0 of its forthcoming OS is now available in project form for netbooks, with development on components for the mobile flavour set to follow in June.

The release, which is the first for Nokia and Intel's joint venture, provides what its makers claim is a 'stable core foundation for application development', with the following version due to make its debut this October.

"MeeGo v1.1 will be released in October and it will include support for touch-based devices, such as handsets, tablets, and in-vehicle infotainment systems.

"The development tree for MeeGo v1.1 is now open and we will start releasing various components in the v1.1 tree, including opening the development of the handset user experience in June."

Both the MeeGO API and SDK have also been released, along with various other OS tools. 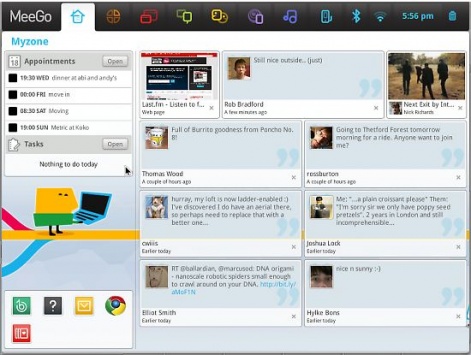 The news comes as Nokia confirmed it won't be offering a MeeGo upgrade to N900 consumers.

The handset, which is regarded as the firm's premier smartphone, currently runs Maemo 5, but Nokia said in a blog post it has no designs on offering MeeGo in to N900 users.

"Although Nokia N900 devices are being used for platform development and testing purposes by those involved in the MeeGo project, Nokia doesnt have plans for a full scale commercial MeeGo upgrade on the Nokia N900," Nokia's Rhiain Morgan said.

"The reason? Its really about ensuring that you have the best possible experience designed for the features on your Nokia N900 device.

"Nokia realises this news may be a disappointment for some, rest assured that Nokia will continue to support the core Maemo software on your Nokia N900, as evidenced by the update available today."