July 8th, 2010 - 04:32pm
By Keith Andrew
The iPod touch's transition from Apple's primary revenue driver to the 'iPhone for people who don't want an iPhone' appears complete, with a leak from UK department store chain John Lewis suggesting we can expect an iPod touch refresh  with iPhone 4 features  this September.

As reported by Electricpig, the revelation was made during John Lewis' Xmas in July event hosted in London, with the store citing supplier rumours as the source behind its iPod touch checklist  a checklist that includes both a 5MP camera with flash and support for FaceTime over wi-fi.

Indeed, as this snapshot from the event shows, the fourth generation iPod touch is also expected to be able to shoot HD video, upload said clips to YouTube, and will come with a gyroscope.

With FaceTime promised, a front facing camera also appears on the cards. 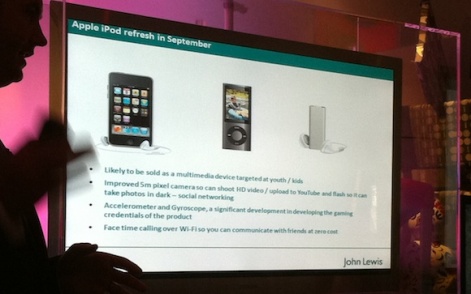 In short, the new touch is being pitched as an iPhone 4 with the phone functionality naturally removed  just as in previous iterations.

Even its launch date falls into line with precedent, with previous iPod touches making their retail debut in September.

Apple Insider recently claimed Apple's focus has been drawn away from its iPod range though, with the sales it generates accounting for 8 percent of the firm's total revenue according to Q4 2010 projections  down from 32 percent in the same quarter four years previous.

Even so, the touch continues to be a fail-safe for the company, enabling it to expand iOS's userbase by selling to consumers who own rival mobile phones, and well as reducing the cost of iPhone components thanks to economies of scale.

As such, we'd only be surprised if the refreshed iPod touch doesn't ship with iPhone 4's A4 chip and Retina display.