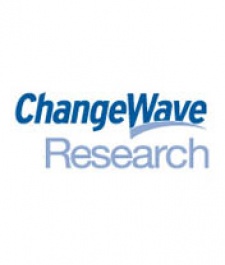 September 23rd, 2010 - 12:53pm
By Keith Andrew
Despite the gains both iPhone and Android have made on BlackBerry in recent months, it's always been assumed RIM's strong hand in enterprise would ensure it didn't get left too far behind as consumers rushed towards its rivals.

Indeed, the latest stats released by ChangeWave Research suggests there's much truth in that.

The firm's recent survey of businesses revealed 66 percent opt to hand out BlackBerry handsets to their employees  more than double the amount that plump for iPhone.

Android in the office

But while RIM would appear to have the business sector sown up, ChangeWave's numbers suggest Android handsets are enjoying something of a surge with enterprise.

Increasing its share five fold in the last nine months, Android now has a 16 percent share of the business market. 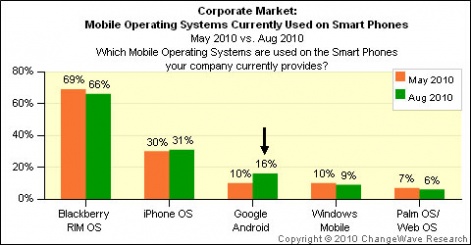 That's up from 10 percent in May, with BlackBerry's hand dropping by 3 percent as a result.

Holding strong between the two is iPhone, which has seen its share of phones handed out to employees rise by 1 percent in the latest numbers from the 30 percent it accounted for back in May.

Things are likely to get even better for Android in the coming months if ChangeWave's forecast proves true, with HTC and Motorola handsets on the shopping lists of many businesses within the next quarter.