October 4th, 2010 - 10:46am
By Keith Andrew
The problem with releasing a marketplace's download stats is it allows you to be directly compared to your competitors.

That's exactly what one company has done with Nokia's most recent Ovi Store numbers.

At the start of October, Nokia revealed daily downloads on the Ovi Store had hit 2.3 million a day  up from May's daily rate of 1.7 million. 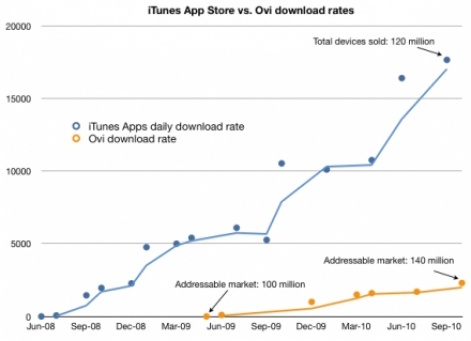 However, asymco claims there's little reason to get excited about such growth, given that Apple's App Store currently hosts 17.7 million downloads a day.

"The slope of the Ovi curve does not yet compel one to get excited over the platforms prospects in the near term," says asymco technical director Horace Dediu in the blog post.

"However to get a true picture, one needs to not only look at absolute download numbers but also the probability of any one user or device being used to download an app."

Doing so, Dediu concludes that the weekly download rate for Symbian users is 0.12 apps, compared to 1.24 for the App Store.

To reach the respective rates, Dediu assumes that there are 100 million active iOS users globally - discounting 20 million from Apple's official total due to upgrades - compared to the 140 million Nokia claims have access to the Ovi Store.

"The rate of downloads per device for iOS is more than 10 times higher [than on the Ovi Store]," he concludes.

"This is the more interesting number if you are a developer."

Reply
John Pope
This is actually an apples-to-oranges comparison. While Ovi Store is the easiest way to discover and download apps for Nokia devices, it isnÂ’t the only way. Because our ecosystem is open, our users also source a significant number of apps from aggregators, and 91 operators around the world. Our aim in disclosing the latest download rate was to show that our efforts to refresh Ovi store, localize experiences, etc., are being well received in the marketplace and are driving new momentum that we anticipate will continue to increase.