Pocket Gamer will be at Droidcon London, 6-7 October

And, of course, we're having a party 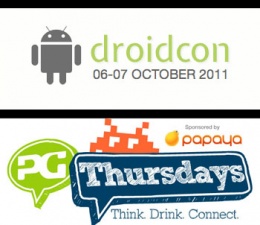 October 4th, 2011 - 04:33pm
By Chris James, CEO
Whilst the entire tech world is caught in the spotlights of the circus surrounding Apple's latest handset launch, it's easy to forget there are other smartphone attractions on offer.

This week - as well as keeping tabs on the latest goings on in Infinite Loop (and the Covent Garden Apple store) - we'll also be rolling up to the Business Design Centre in Islington for Droidcon London on 6 and 7 October to chat to those who less obsessed with all things iShiny and rather more focused on little green Androids.

We'll be wandering the floors of the show on both days so if you fancy a chat, drop us a line at the addresses below.

Party onSuffice to say, we couldn't let such a gathering go by without a good old fashioned networking drinks.

As such we'll be holding the first ever PG Thursday networking drinks - think Mobile Monday but for games and on a better boozing night - in cahoots with Papaya Mobile at a nearby location from 6:30pm on Thursday.

If you're an Android game developer or general industry luminary and have not already been invited, then please do send an appropriately indignant mail with your name, company and role to: