Universal Pictures and metaio team up to launch AR release The Thing: Flame Thrower on iOS and Android

Coincides with The Thing movie prequel 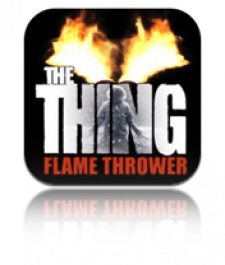 October 14th, 2011 - 02:25pm
By Matt Sakuraoka-Gilman
In time for the upcoming prequel to the 1982 John Carpenter movie The Thing, augmented reality specialist metaio has teamed up with Universal Pictures to add an extra string to the franchise's bow: a smartphone app.

With the film already out in the US  and due to make the leap to the UK on December 2  metaio has launched AR release The Thing: Flame Thrower on both iOS and Android.

The main event is a 360 degree flamethrower challenge where players are tasked with defending themselves from beasts approaching on all sides.

Given it's an AR game, players will need to hold up their handset and move it around to defend themselves.

There's also a photo morphing feature, where players can churn their face to it resembles one of the film's many 'infected' stars. Said photos can then be uploaded to share with family and friends.

"We're very pleased to partner with Universal on building a game that is not only fun to play, but also places the player amidst a similar horrific and suspenseful environment as the film," said Lisa Murphy, project lead and metaio senior business development manager.

"Our Mobile SDK allows us to create rich, interactive mobile applications that truly immerse the user in the experience."

Developed using metaio's advanced Mobile SDK, The Thing: Flame Thrower can be downloaded for free from both the App Store and Android Market.